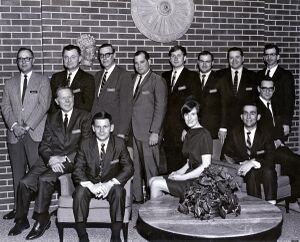 I am with a group of Bell Labs engineers at an Operating Company visit in Nashville, TN. My now deceased husband, Bill, is seated next to me on the right. The Dec. 1970 ESS lab image is more representative of my work environment at Bell Labs. 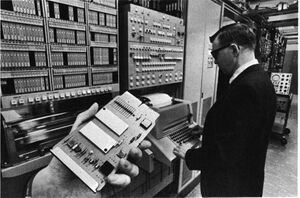 The prototype office where I and another engineer placed the first phone call. It is not me standing at the terminal but I spent a lot of time there. 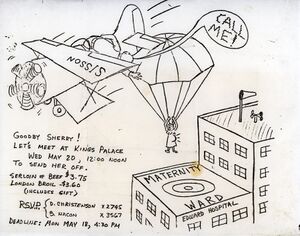 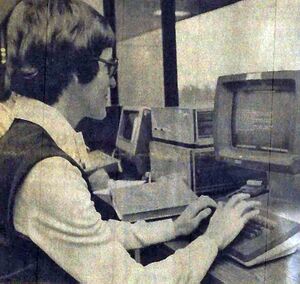 HP – working in QA. I could not find any other HP work photos. 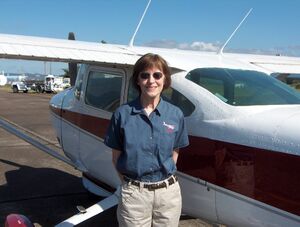 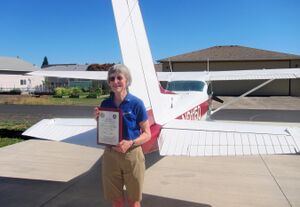 2016 photo by my plane. I had just received an award (Master Pilot Award) from the FAA for 50 years of safe flying.

In my family, it was expected that I would go to college and get a degree in something my father called ‘employable’. I was good in math, so I enrolled at Oregon State as a math major. Before I went off to college, Rev. Jack Thompson was at the house and had a conversation with me. Jack earned a BSEE in college, then was a Navy seal before going into the ministry. He was the Episcopal minister in town and a longtime family friend. He encouraged me to consider majoring in engineering. He shared that EE was intellectual, not physical work, and would open up more career opportunities. Engineering as a major had not entered my mind until that talk.

Fast forward to my senior year at Oregon State. Like the other seniors, I signed up for on-campus job interviews. When Bell Labs came, I wasn’t going to interview them because I did not see myself going to live in New Jersey when all my family was on the west coast. One of my professors encouraged me to interview just for the experience. January of my senior year, I began dating my future husband, Bill Sisson. Bell Labs had sent me an invitation to an on-site interview in New Jersey. I was very naive about the corporate world at that time. I told Bill that I was going to turn down the invitation because it would be very expensive for them to fly me back there when I did not want to leave the west coast. He very emphatically told me to go on the interview trip. The cost was noise to Bell Labs. I went. The interviews were very stimulating and the work fascinating. I was accepted into Stanford’s MSEE program. My choice came down to those two. I could not ask my family to finance the Stanford degree when Bell Labs would pay for it as part of the job. I was the oldest of seven children. My parents would be financing educations for a long time. I was off to Bell Labs. Bill also got a Bell Labs offer. We worked in different departments. Bell Labs did not know of our romantic status until after we were working there.

I feel I had a great career overall. I don’t consider myself all that exceptional. I was never a superstar at anything but mostly competent at the tasks I took on. I feel lucky to have worked with and learn from many bright people. Other women have certainly accomplished much more than me in the technical world. It is disappointing that even today so few women venture into technical jobs. I found the work and people to be what kept me wanting to stay involved. What follows is a summary of my career written over this weekend. I don’t know if you think there is any significant history here. If you would like me to expand on any area, please let me know.

My first job at Bell Labs was developing software for the first Electronic Switching System. We did what was called concurrent engineering, simulating the hardware before the hardware was available. It took five years before the first central office was online in a commercial environment. I started when the project was just beginning. There was a hardware group developing hardware for both commercial and military systems. There were two software groups, one developing the simulators and the other the product software. We wrote in assembly language developed by the group; used punch cards and IBM computers. I was the only woman working on the project other than the steno/secretarial pool. My boyfriend at the time, Bill Sisson, was hired into the hardware group at the same time I was hired to work on the software. The highlight of that project for me came when two people were picked to debug the prototype central office in the lab; one hardware engineer and one software engineer. I was the software engineer. Our job was to complete a phone call. As I recall, it took us about three weeks to complete the assignment. We had a lot of management asking us “Are you there, yet?”

I had a few incidents that occurred because I was a female working in a male-dominated environment. A rare negative experience at Bell Labs occurred a few months before I left in 1970. Raises were handed out all at the same time around April each year. I had been enjoying a very productive year, really coming into my own. I expected to get a very good raise. My director called me into his office and told me I had done outstanding work but I would not be getting a raise. Because I was leaving the company in a few months, he decided to put my raise money into the pool for all the other engineers. I was stunned! I lost all motivation for work those last few months. My immediate supervisor had conveniently just started a three-week vacation at that time. I always wondered if he did that just so he would not have to deal with me after the raises came out. I did not want to burn bridges because I envisioned myself returning to the work environment sometime down the road. This event upset me enough to enroll in the John Marshall School of Law. After a few classes, I realized I would not have any fun being a lawyer. Except for this incident, I was generally well accepted at work. The people and work were stimulating and I looked forward to coming to work each day.

Part of the hiring agreement at Bell Labs as an MTS was that you earn an MSEE. Bell Labs also required in-house courses. I learned software engineering through those courses at Bell Labs and earned my MSEE at Northwestern University.

Bell Labs did not allow pregnant women to continue employment. Labs at the time terminated your employment if you were about 4-5 months pregnant. That’s just the way it was back then. That policy certainly would not fly today. I was the only woman working with about 100 men. The only women in the area were those in the steno/secretarial pool. The men either were not aware of the policy or did not care. After it became obvious that I was pregnant, the steno ladies made my supervisor aware of the policy. One’s termination date was determined by bringing a note from your doctor with your due date. My doctor asked me how long I wanted to work. I said I would like to work until the baby was due. He made my due date on the note such that I could work until the baby was due. I’m sure that caused much discussion in the steno pool. After I left Bell Labs, I did some contract work for them.

I left in June 1970, shortly before the first central office went live. My first son was born in late June 1970. I had another son two years later. During this time I kept in touch with the working world by teaching a course at the local junior college and doing part-time contract work for Bell Labs.

My husband, Bill, got an offer from a friend to work for Lawrence Livermore Labs in the San Francisco bay area in 1974. This offer was enticing because our families were both located on the west coast. Bill took the opportunity to look at other companies in the area. At the time Hewlett-Packard and recently invented the small calculator, the HP35. Bill went to work for Hewlett-Packard.

We were in Sunnyvale for two years. During that time, I interviewed several times with Bell Northern Labs. They were developing the same functionality for Canada that I had worked on at Bell Labs. I could have been immediately useful to them. They would only offer a full-time position. I would only accept a part-time position. In the meantime, I taught a graduate-level course at San Jose State University. Bell Northern finally offered me a part-time position, but by that time Hewlett-Packard was about to move the calculator group to Corvallis, OR.

After moving to Corvallis, I again sought part-time employment. Before I married Bill in 1966, he had decided to pursue a private pilot’s license. He gave me a learn-to-fly certificate for Christmas of 1965. I decided I had better learn to fly if I was going to marry him. Both Bill and I obtained private pilot licenses in 1966. We were now part owners of a Cessna 182 along with two other HP employees in Corvallis. Part-time employment was unheard of at HP, but I got such a job in the QA department through one of our airplane partners. I worked on the HP 41C and HP01 watch. I, along with my manager, developed an automated test tool during that time. After about 5 years of part-time, I returned to full-time work. My first taste of management was with the QA group.

I moved into R&D as an engineer working on software development for a portable computer. I focused on drivers as they directly interfaced with the hardware. I later got into the User Interface area. I coordinated a large UI project with three other computing companies. I went on to manage a software release team. From there I went into an operations group that managed servers supporting HP internet products. My last job was as an analyst reporting to senior management. I essentially kept a pulse on the engineering work for the management. The work environment was changing at Hewlett-Packard. Retirement packages were regularly offered. I took one of those offers in 2005.

After retiring, I got a hearing aid dispenser’s license, not to practice but to gain access to research and technology trends. I had developed significant hearing loss and had the opportunity to connect with a research-oriented audiologist. I did one short stint as a contract worker for HP that I found very disappointing. I then concentrated on flying, obtaining my Commercial and Instructor ratings. Flying and hearing research are my main technical interest areas at this time. I have plenty of other non-technical interests to more than fill my time.

Retrieved from "https://ethw.org/w/index.php?title=First-Hand:My_Technical_Career&oldid=184440"
Categories:
This page was last edited on 26 March 2021, at 16:24.
About ETHW
Policies and disclaimers