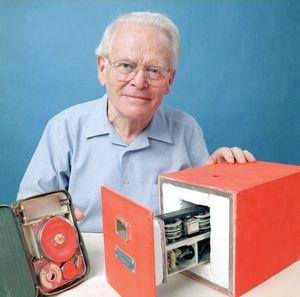 David Warren was born on Groote Eylandt, Northern Territory in 1925 to missionary parents. The family later moved to Tasmania, but David's father was tragically killed in 1934 in one of Australia's earliest air disasters. David was only nine years old at the time. The last gift he received from his father was a crystal radio set, which triggered David's lifelong interest in electronics. Warren graduated with honors from the University of Sydney, then earned a diploma in education from the University of Melbourne and a Ph.D. in chemistry from Imperial College London.  He returned to his homeland to work for the Australian Defense Department doing aeronautical research, and, because of his background, he volunteered to tackle the proble of civilian air crashes.

In 1954, Mr. Warren wrote a paper titled “A Device for Assisting Investigation Into Aircraft Accidents.” Three years later, he completed building the first flight data recorder, which he named the ARL Flight Memory Unit. This is the key technology now know as "the black box."  The Australian government was originally not interested, but the British Air Registration Board took it up, and the idea spread.  Warren continued to work for Australia’s government, won many honors. He died in Australia on 19 July 2010.

Retrieved from "https://ethw.org/w/index.php?title=David_Warren&oldid=145562"
Categories:
This page was last edited on 21 January 2016, at 16:46.
About ETHW
Policies and disclaimers