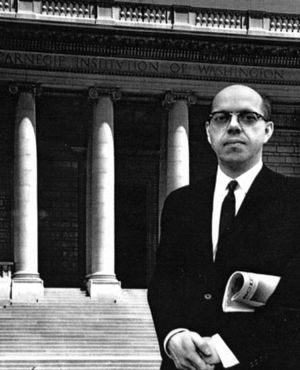 Philip Abelson was born in 1913 in Tacoma, Washington. He attended Washington State University where he received degrees in Chemistry and Physics, and the University of California, Berkeley, where he earned his Ph. D. in Nuclear Physics. As a young physicist, he worked for Ernest Lawrence at the University of California, Berkeley. He was among the first American scientists to verify Nuclear Fission in an article submitted to the Physical Review in February of 1939 In addition, he collaborated with Nobel Prize winner Luis Alvarez in early nuclear research, and was the co-discoverer of the element Neptunium on June 8, 1940 [with Edwin McMillan, who was awarded the Nobel Prize for the discovery].

He was a key contributor to the Manhattan Project during World War II. Although Abelson was not formally associated with the atom bomb project, the Liquid Thermal Diffusion isotope separation technique that he invented was used in the S-50 plant in Oak Ridge, Tennessee, and proved a critical step in creating sufficient fuel for the weapon.

After the war, he turned his attention under the guidance of Ross Gunn to applying nuclear power to naval propulsion. While not written at an engineering-design level, he wrote the first physics report detailing how a nuclear reactor could be installed in a submarine, providing both propulsion and electrical power. His report anticipated the nuclear submarine's role as a missile platform. This concept was later supported by Admiral Hyman G. Rickover and others. Under Rickover's relentless leadership, concept became reality in the form of USS Nautilus, the world's first nuclear-powered submarine.

From 1951 until 1971 he served as the director of the Carnegie Institution of Washington's Geophysical Laboratory, and served as president of the Institution from 1971 to 1978. From 1962 to 1984 he was editor of Science magazine, published by the American Association for the Advancement of Science (AAAS), and served as its acting Executive Officer in 1974, 1975 and 1984. From 1972 until 1974 he served as President of the American Geophysical Union (AGU).

During the 1970's he became interested in the problem of world energy supplies. Books on the topic include "Energy for Tomorrow" (1975), from a series of lectures at the University of Washington, and "Energy II: Use Conservation and Supply". He pointed out the possibilities of mining the Atabascan tar sands, as well as shale oil in the Colorado Rockies. In addition he urged conservation and a change of attitude towards public transit. Philip H. Abelson (1975). Energy For Tomorrow.

Perhaps his most famous work from this time period is an editorial entitled "Enough of Pessimism" ("enough of pessimism, it only leads to paralysis and decay"). This became the title of a 100 essay collection. Philip H. Abelson (1985). Enough of Pessimism.

After 1984, he remained associated with the magazine. Some have claimed him to be an early skeptic of the case for global warming on the basis of a lead editorial in the magazine dated March 31, 1990 in which he wrote, "[I]f the global warming situation is analyzed applying the customary standards of scientific inquiry one must conclude that there has been more hype than solid fact." However, in 1977 in the foreword for a US National Research Council, Energy and Environment report he wrote, "What should the atmospheric carbon dioxide content be over the next century or two to achieve an optimum global climate?", implying a level of connection between CO2 and climate that would put him outside today's skeptic camp.

Retrieved from "https://ethw.org/w/index.php?title=Philip_Abelson&oldid=166374"
Categories:
This page was last edited on 12 September 2018, at 15:47.
About ETHW
Policies and disclaimers