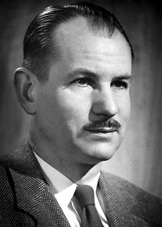 Edwin Mattison McMillan was born on 18th September, 1907, at Redondo Beach, California. He is the son of Dr. Edwin Harbaugh McMillan, a physician, and his wife, Anne Marie McMillan, née Mattison, who both came from the State of Maryland and were both of English and Scottish descent. The boy spent his early years in Pasadena, California, and obtained his education in that state.

McMillan attended the California Institute of Technology, obtaining a B.Sc. degree in 1928, and taking his M.Sc. degree a year later, then transferring to Princeton University for Ph.D. in 1932. The same year he entered the University of California at Berkeley as a National Research Fellow. The thesis he submitted for Ph.D. was in the field of molecular beams, and the problem he undertook as a National Research Fellow was the measurement of the magnetic moment of the proton by a molecular beam method. After two years on this work and one as a research associate he became a Staff Member of the Radiation Laboratory under Professor E.O. Lawrence, studying nuclear reactions and their products, and helping in the design and construction of cyclotrons and other equipment, and a member of the Faculty in the Department of Physics at Berkely, being appointed Instructor in 1935, Assistant Professor in 1936, Associate Professor, 1941, and Professor in 1946.

It was during 1945 that he had the idea of "phase stability" which led to the development of the synchroton and synchro-cyclotron; these machines have already extended the energies of artificially accelerated particles into the region of hundreds of MeV and have made possible many important researches.

McMillan returned to the University of California Radiation Laboratory as Associate Director from 1954-1958, when he was raised to Deputy Director and finally Director, in the same year.

In 1951 he received the 1950 Research Corporation Scientific Award, and in 1963 he shared the Atoms for Peace Award with Professor V. I. Veksler.

An honorary doctorate in science was awarded to him by the Rensselaer Polytechnic Institute in 1961, and by Gustavus Adolphus College in 1963.

While serving in the Faculty of Physics at Berkeley, McMillan married Elsie Walford Blumer, a daughter of Dr. George Blumer, Dean Emeritus of the Yale Medical School. There are three children of the marriage - Ann Bradford (1943), David Mattison (1945) and Stephen Walker (1949).

Retrieved from "https://ethw.org/w/index.php?title=Edwin_M._McMillan&oldid=145693"
Categories:
This page was last edited on 22 January 2016, at 19:25.
About ETHW
Policies and disclaimers