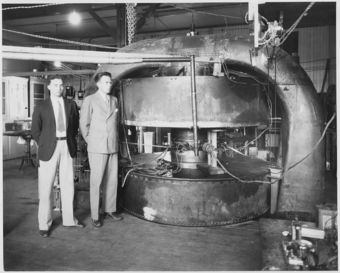 M. Stanley Livingston (L) and Ernest O. Lawrence in front of 27-inch cyclotron at the old Radiation Laboratory at the University of California, Berkeley, 1934.

Nuclear and plasma sciences deal with the study of atomic particles, including the state of plasma where a certain number of particles are ionized. While early atomic theory dates back to the late 18th century with the work of Antoine Lavoisier and Joseph Louis Proust, subatomic particles, specifically the electron, was discovered in 1897 by J.J. Thomson. Ernest Rutherford's model in 1909 gave a further understanding of nuclei and the Bohr model was developed in 1913, providing for a brief explanation of quantum mechanics. Rutherford would later discover the proton in 1918 and the proton-neutron model was proposed by Dmitry Ivanenko in 1932. Credit for the discovery of the neutron was given to James Chadwick, who won the Nobel Prize for his discovery in 1935.

Further understanding of atomic structure led to particle accelerators in the form of the cyclotron (1932) and experiments with nuclear fission and fusion during the Manhattan Project resulting in the atomic bomb. More powerful particle accelerators called synchrotrons would be developed in the 1950s with the Bevatron and the Cosmotron. Synchrotrons are still used today, the largest of which being the Large Hadron Collider, built by CERN in 2009.

Retrieved from "https://ethw.org/w/index.php?title=Category:Nuclear_and_plasma_sciences&oldid=103618"
Category:
This page was last edited on 22 July 2014, at 17:10.
About ETHW
Policies and disclaimers