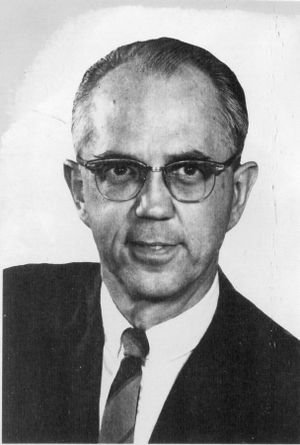 Martin E. Packard was born on March 10, 1921 in Eugene, Oregon, and he grew up in the Pacific Northwest. After graduating from Oregon State College in 1942 with a B.A. in physics, Martin joined the Westinghouse Electric Corporation as a research engineer in Pittsburgh, Pa., where he was assigned to a group in the microwave laboratory.

In March 1945, Martin and some of his group were sent to the University of California Radiation Laboratory at Berkeley to join in the Manhattan Project. He became involved in the development of mass spectrometers for separation of uranium isotopes.

After the war, Martin left the "laboratory and was introduced to Professor Felix Bloch, who needed a graduate student to assist him in his nuclear induction experiments at Stanford. One cold night in January 1946, in the basement of the Stanford University Physics Department, two professors and a graduate student adjusted their hand-made equipment and stood back to watch a line of light being traced across a flickering oscilloscope. An old lecture demonstration electromagnet, modified and calibrated by Dr. Bloch, contained a special probe that had been carefully made by the late Dr. William Hansen. Enclosed in the probe was a small sample of water which was being subjected to radiofrequency signals generated by equipment built by the graduate student, Martin Packard. The three were delighted to see a signal march across the oscilloscope screen, and a repetition of the experiment repeated the same results. This proved the soundness of Dr. Bloch's concept of nuclear induction, the parent of the nuclear magnetic resonance principle. After the experiments which led to the discovery of nuclear magnetic resonance, Martin proposed and built a magnetic field regulator and fluxmeter using the resonance of the hydrogen nuclei in water. His 1948 paper on this subject in the Review of Scientific Instruments is widely known and quoted as one of the earliest practical applications of nuclear magnetism.

In 1951, Martin was hired at Varian Associates to work on the "Black Box" radar filter conceived by Russell Varian. In March 1955, he was appointed Manager of Research and Development for the Instrument Division. In mid-1963, he was named General Manager of the Analytical Instrument Division and was appointed Division Vice President in 1965. He was elected Vice President of the Corporation in 1969.

Martin did a great deal of traveling, some for pleasure, but most on business. He has been in nearly every part of the world during the last fifteen years.

His son, George, recently graduated from Purdue University and his daughter, Jane, is attending Swarthmore. He and his wife, Barbara, lived in Los Altos Hills, California, where he pursues what is apparently his major avocation - restoring antique cars. He drove a 1937 Packard automobile which he and his son restored.