The Milestone plaque can be viewed on a wall outside the cyclotron main control room at TRIUMF Meson Facility, 4004 Wesbrook MallVancouver, BC V6T 2A3, Canada. (The first successful beam extraction was manually controlled from the main console in that room.) 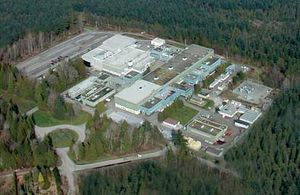 Compared to the first and second generation of cyclotrons that provided much lower beam energies and intensities, the physical size of the 500 MeV cyclotron is truly impressive. The main magnet is 18 metres in diameter and weighs 4000 tons. The 23 MHz main RF amplifier delivers almost 1 million watts of power in order to develop 200 kV across the accelerating gap. The photo below was taken during a maintenance period with the lid of the cyclotron's vacuum tank raised. The lone figure in the centre of the photo gives a sense of scale. 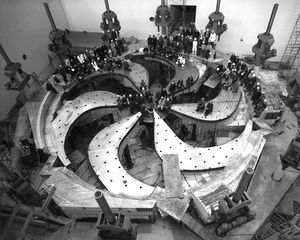 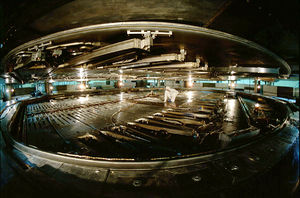 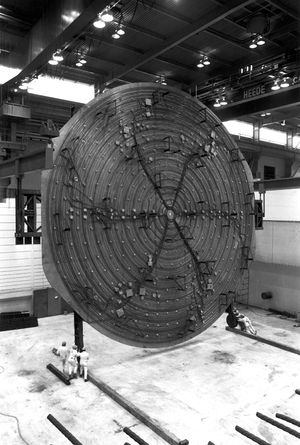 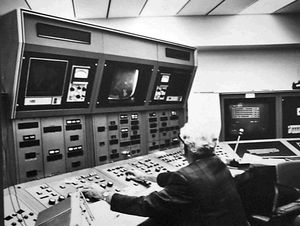 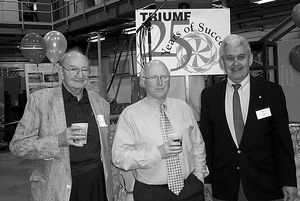 In the 1980s, TRIUMF proposed to use the 500 MeV cyclotron to inject proton beams into a complex of storage rings and synchrotrons (often referred to as the KAON Factory) that would raise the proton beam energy to 30 GeV and yield the most intense high energy proton beams in the world - about 100 times the particle flux of existing machines. Details are described in many publications, including:

KAON is both the name of the high energy K-mesons that the accelerator complex would have made and an acronym that refers to the entire suite of particles that would have been produced, including K-mesons, Anti-protons, Other hadrons and Neutrinos.

Although the KAON project was unable to secure the international investment required to proceed to full construction and was eventually shelved in the mid-1990s, the intense development effort prepared the TRIUMF Laboratory to take on other ambitious projects in the 1990s and 2000s. Foremost among these is ISAC (Isotope Separation and Acceleration), a facility in which a proton beam from the 500 MeV cyclotron is used to produce beams of exotic isotopes which are further accelerated using linear accelerators. The facility allows researchers to study the properties and structure of these exotic isotopes.

TRIUMF is contributing the skills and knowledge that it has developed during the past forty years to other labs. It has provided accelerator and beam-line components to facilities such as the Hadron-Electron Ring Accelerator (HERA) at DESY in Hamburg, the Alternating Gradient Synchrotron (AGS) at the Brookhaven National Laboratory in Long Island, New York and the Large Hadron Collider (LHC) at CERN. It has also provided detectors and other equipment used in the ATLAS detector employed by the Large Hadron Collider (LHC) at CERN and the T2K (Tokai-to-Kamioka) neutrino oscillation experiment in Japan.