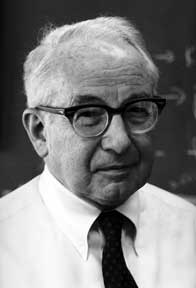 Robert Bacher's accomplishments are often obscured by those of famous contemporaries such as Robert Oppenheimer, Hans Bethe, and Enrico Fermi. However, his contributions to the Manhattan Project are indisputable.

Bacher grew up in Ann Arbor, Michigan, and attended the University of Michigan as an undergraduate student. In 1926, he was awarded a BS in physics. Bacher began his graduate education at Harvard University, but after a year returned to Michigan. He was awarded a PhD in 1930.

Upon graduation, Bacher secured a post-doctorate fellowship at Michigan. He won similar fellowships at the California Institute of Technology and the Massachusetts Institute of Technology, as well as a second fellowship at Michigan. When Bacher completed his post-doctorate work in 1932, the young physicist found himself out of work. Supported by his family, he began to develop an interest in nuclear physics during his year of unemployment. This new pursuit would change the rest of his life.

In 1934 Bacher began his teaching career at Columbia University, where he served until 1937. That year, he became an assistant professor at Cornell University. He was promoted to associate professor in 1940 and to full professor in 1945. However, Bacher did not confine himself to Cornell during these years. In 1941, with war just months away, he returned to MIT as a leader at the Radiation Laboratory. Bacher was still at MIT in 1943 when J. Robert Oppenheimer summoned him to Los Alamos to lead the Experimental Physics Division. When the laboratory was reorganized in August 1944, Bacher became leader of G ("Gadget," code name for the bomb itself) Division. As division leader, he was responsible for the design of the implosion, or "Fat Man," bomb. While at Los Alamos Bacher, a brilliant manager, also served on several committees, including the Governing Board, the Administrative Board, the Technical Board, the Coordinating Council, the Intermediate Scheduling Conference, and the Cowpuncher Committee.

Immediately after the war, Bacher held a variety of posts, including a stint at the United Nations as one of Bernard Baruch's technical advisors. In 1946, Bacher was appointed a charter commissioner on the Atomic Energy Commission (AEC). The AEC's first chairman, David E. Lilienthal said of Bacher, "He will make all the difference in the world." Bacher, the only scientist on the commission, accepted the post with some hesitation, but served effectively until his second term ended in May 1949.

After serving on the commission, Bacher questioned the military usefulness of the hydrogen bomb during the debate over its proposed development. He advanced his arguments in a logical and articulate manner that commanded the respect of even his most aggressive opponents. In 1949 Bacher went back to CIT, where he had worked as a post-doctorate fellow almost two decades before, to head the Physics, Mathematics, and Astronomy Division. He rebuilt the division, attracting world-renowned physicists such as Richard Feynman and Murray Gell-Mann. Bacher remained at CIT as a faculty member until his retirement in 1976. He was awarded the permanent title, Professor Emeritus. He died at the age of 99 on November 18, 2004.

Retrieved from "https://ethw.org/w/index.php?title=Robert_Bacher&oldid=146975"
Categories:
This page was last edited on 24 February 2016, at 20:31.
About ETHW
Policies and disclaimers