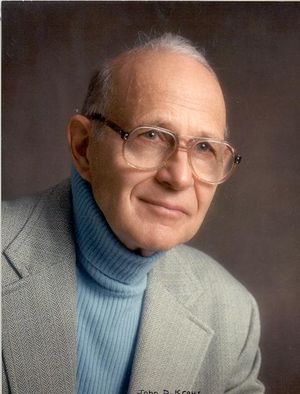 John D. Kraus was born in Ann Arbor, MI in 1910, and earned his B.S., M.S., and Ph.D., the final degree in Physics in 1933, from the University of Michigan. Fascinated with radio as a boy, he became involved with Hertzian waves, first as an amateur and then as a professional.

Before World War II Kraus developed antennas including the corner reflector and W8JK close-spaced array. He also helped construct and operate the University of Michigan 100-ton cyclotron, then the world's most powerful particle accelerator. During World War II, Kraus did degaussing (protecting ships from magnetic mines) at the U.S. Naval Ordnance Laboratory and later developed antennas at the Radio Research Laboratory, Harvard University.

In 1946 Kraus joined the faculty of the Ohio State University. Soon after coming to Ohio State, he invented the helical antenna which became the workhorse of space communication. His corner-reflector invention came to be used by millions for TV reception, while his unique radio telescope design has been utilized in several European radio telescopes. He spent his career at Ohio State, rising to be the McDougal Professor of Electrical Engineering and Astronomy and Director of the Radio Observatory.

Perhaps best known for his association with the Big Ear radio telescope, Kraus produced some of the first maps of the radio sky and co-discovered many of the most distant known objects in the universe. As inventor of antennas and builder of radio telescopes he was also a radio engineer. And as an educator, he taught and authored textbooks which span four decades. In addition to his textbooks (Radio Astronomy 2nd edition, 1986, Antennas 2nd edition, 1988, and Electromagnetics 4th edition, 1990), he wrote popular books as well, including Big Ear (1976) and Our Cosmic Universe (1980). Both independently and with students, he authored hundreds of research papers.

Kraus joined the IRE, one of the predecessor organizations of the IEEE in 1932. He became Chairman of its Detroit Section and for 15 years served as a member of the Editorial Board of the IRE Proceedings. He became a Fellow of the IEEE in 1954 and member of the National Academy of Engineering in 1972. In the 1950's he served on President Eisenhower's Science Advisory Committee and also the committee which established the National Radio Astronomy Observatory.

Kraus’ many awards include the Sullivant Medal from the Ohio State University (1970), the Outstanding Achievement Award of the University of Michigan (1981) and the Centennial Medal (1984). In 1985 he was awarded the IEEE Edison Medal in 1985 "For a sustained career as an innovator, discoverer, and educator in the fields of antennas and radio astronomy."

Retrieved from "https://ethw.org/w/index.php?title=John_D._Kraus&oldid=146304"
Categories:
This page was last edited on 1 February 2016, at 16:06.
About ETHW
Policies and disclaimers