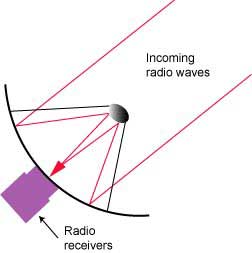 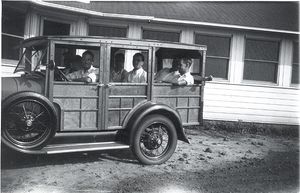 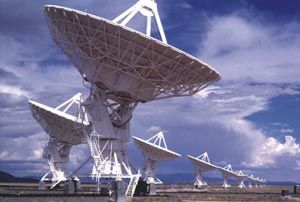 A radio telescope typically consists of a parabolic (bowl-shaped) antenna similar to a modern satellite dish. This dish collects incoming radio or microwave radiation and focuses it onto a sensitive receiver located behind or below the antenna. Inside the receiver, the incoming waves are converted into electrical signals. Computers then process those signals to form images of the sky as it would look if our eyes were able to see at radio or microwave frequencies.

In the early 1930s, Karl Jansky, a young Bell Laboratories engineer, built the first highly directional radio frequency antenna ("highly directional" means it accepted radiation only from the direction in which it was pointed). Jansky was trying to determine the origins of static noise in transatlantic short-wave communications at wavelengths of about 10-20 meters (about 33-66 feet). In 1932 Jansky reported that some of this noise was coming from extraterrestrial sources, strongest toward the center of our Milky Way galaxy. Jansky planned to build a larger 30-meter (100-foot) diameter dish for further studies but was turned down by Bell Labs. A ham radio operator named Grote Reber picked up on the idea in 1937 and built a 10-meter (33-foot) diameter parabolic antenna in his back yard. With this home-built equipment, Reber performed the first systematic sky survey at radio frequencies. Advances made in radar technology during World War II became available to the growing radio astronomy community in the post-war years. As time went by, these techniques were extended to higher frequencies and shorter wavelengths, so that today observations of this type are also made at microwave, millimeter, and sub-millimeter wavelengths.

In 1965 microwave engineers Arno Penzias and Robert Wilson made one of the most important cosmological discoveries of the 20th century. Working at Bell Labs, they were also investigating noise in communications when they found microwave background radiation coming from all directions in space. The existence of this cosmic microwave background had been predicted as a consequence of the Big Bang theory by Robert Dicke. The Big Bang theory postulates that the universe was created in a primordial explosion followed by expansion. The data of Penzias and Wilson was interpreted as direct confirmation that the universe indeed began in a great explosion. This momentous discovery produced its own explosion in the building of many new radio telescopes around the world.

Modern computers now permit signals from multiple antennas to be combined to create effectively large apertures for better resolution, as in the Very Large Array (VLA) at Socorro, New Mexico. Dedicated in 1980, the VLA is composed of 27 individual antennas arranged in the form of a "Y". This creates an effective aperture up to 36 kilometers (22 miles) in diameter. Each individual antenna is 25 meters (82 feet) in diameter and weighs approximately 230 tons. A buried communications system carries control information to the antennas, and returns astronomical data from the receivers to a central computer in the control building. A similar system, completed in 1993, is the Very Long Baseline Array or VLBA. The VLBA uses ten antennas separated by thousands of miles for even better resolution.

The international community is currently building an even larger array of 64-millimeter-wavelength telescopes high in the Andes Mountains of Chile. The main purpose of this instrument will be to look farther back in time to the most distant galaxies, which cannot be seen at optical wavelengths, for clues to the evolution of the early universe.

Retrieved from "https://ethw.org/w/index.php?title=Radio_Telescope&oldid=177972"
Categories:
This page was last edited on 4 December 2019, at 18:08.
About ETHW
Policies and disclaimers