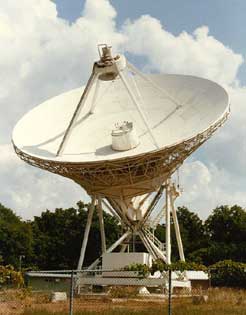 Very Long Baseline Array or VLBA consists of ten radio telescope antennas located in various places in the United States and its territories from St. Croix, in the Virgin Islands, to Mauna Kea, Hawaii. Astronomical data gleaned from the stations are recorded on digital tape. The tapes are then shipped to the Socorro, New Mexico Operations Center where they are correlated. Using multiple small antennas provides the same results as using a single huge [8000 kilometers (4970 miles) wide] radio telescope. That means that it can detect stars and other celestial objects that are much farther away than single-antenna radio telescopes, or see closer objects with great clarity.

Each antenna site consists of a 240-ton antenna with a diameter of 25 meters (82 feet), along with a small control building. Inside the small control buildings are computers, data tape recorders, radio receivers, and even a weather station (since atmospheric disturbances can make it difficult to use a radio telescope). Construction of these antennas began in 1983, and the system created its first images of distant objects in May 1993. The sites cost $85 million to build and have an annual budget of $7 million.

Since the early 1990s, the data gathered by the VLBA have contributed significantly to the understanding of the universe. The system has been particularly effective in studying “radio galaxies,” astronomical systems that emit high levels of energy, and has shown that these are the result of gasses falling into massive black holes. The VLBA was also used to make detailed observations of a giant black hole at the center of the Milky Way (the galaxy that contains our solar system). It is particularly good for studying quasars, star-like bodies that emit huge amounts of energy, and for plotting the speed of material emitted from exploding stars called supernovas. One of the most unexpected uses invented for the VLBA is to study the earth itself. Because the precise location of each station in the VLBA system is known, and because those locations are so spread out, the system can be used to track the movements of the continental plates as they slowly slide around the surface of the earth.

Retrieved from "https://ethw.org/w/index.php?title=Very_Long_Baseline_Array&oldid=120371"
Categories:
This page was last edited on 28 September 2015, at 19:54.
About ETHW
Policies and disclaimers