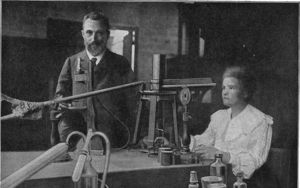 In early June 1903, Pierre and Marie Curie appeared at London’s prestigious Royal Institution to present the findings of their recent research in radioactivity, for which they won a Nobel Prize later the same year. Notably, when Pierre took the lecture stand and began to explain their work, Marie was sitting in the audience. The Royal Institution did not allow women lecturers, but such sexism would not stand in the way of Marie Curie.

Marie Curie was born Maria Sklodowske on 7 November 1867 in Warsaw, Poland. She grew up in a family that greatly valued education and in 1891 she moved to Paris to study mathematics, chemistry, and physics at the Sorbonne. While there she adopted the French spelling of her name (Marie) and met Pierre. They married in a simple civil ceremony in July 1895. Neither wanted a religious service. Marie had foregone her Roman Catholic faith after the death of her mother at a very young age, and Pierre had never been religious. Reflecting the Curie’s “freethinking liberalism,” they did not exchange rings.  Instead of a bridal gown, Marie wore a dark blue outfit, which for years after seconded as a lab garment.

After their marriage, Marie and Pierre began working together on research into radioactive substances. One of their discoveries was that uranium ore contained much more radioactivity than could be explained solely by the uranium content itself. Marie thought that the emission of rays by uranium compounds could be an atomic property of the element uranium—something built into the very structure of its atoms. Marie’s simple hypothesis would ultimately contribute to a fundamental shift in scientific understanding. In those days, scientists regarded the atom—a word meaning undivided or indivisible—as the smallest of all particles. The discovery of electrons around this same time began placing doubt on this long-held belief. But nobody grasped the complex inner structure or the immense energy stored in atoms. Marie’s achievement was to cut through the complicated and obscure observations with a crystal-clear analysis of a set of conclusions that, however unexpected, were logically possible.

Armed with the hypothesis, the Curies began a search for the source of the radioactivity in the uranium ore and discovered two highly radioactive elements, “radium” and “polonium.” With that they achieved one of the highest goals that a scientist of the time could hope to achieve—placing new elements in the Periodic Table. But the Curies’ work with radioactive materials took its toll on them both. Marie suffered a miscarriage in 1903, which may have been linked to radioactive exposure, and Pierre underwent an agonizing period of sickness linked directly to such exposure before being hit by a car and killed in 1906.

Not one to give in to defeat, Marie continued her work on radioactive elements and won the 1911 Nobel Prize for Chemistry for isolating radium and studying its chemical properties. She was the first person to win two Nobel Prizes. In 1914 she helped found the Radium Institute in Paris, and she became the Institute’s first director. When World War I broke out, Marie thought x-rays would help to locate bullets and facilitate surgery. It was also important not to move the wounded, so she invented x-ray vans and trained 150 female attendants. Her creation of field x-rays saved thousands of lives.

On 4 July 1934, at the age of 67, Marie died of leukemia most likely acquired from her long exposure to the high levels of radiation involved in her research. After her death the Radium Institute was renamed the Curie Institute in her honor.

Retrieved from "https://ethw.org/w/index.php?title=Marie_Curie&oldid=146571"
Categories:
This page was last edited on 4 February 2016, at 15:10.
About ETHW
Policies and disclaimers