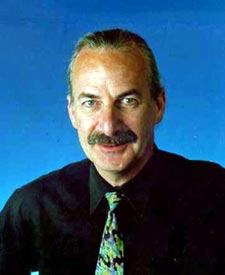 Don Eigler is a physicist at IBM’s Almaden Research Center in San Jose, California. His work focuses on creating and researching physical structures at the nanometer scale. Eigler received a B.A. in physics in 1975 and a Ph.D. in physics in 1984, both from the University of California at San Diego He then served as Postdoctoral Member of the Technical Staff at AT&T Bell Laboratories for two years before joining IBM. In 1993, Eigler was named one of only fifty IBM Fellows, the most prestigious technical position in the company. Eigler is widely considered one of the leading researchers working in the field of nanotechnology today.

In 1989, Eigler demonstrated for the first time the ability to build structures at the atomic level. Eigler used a tunneling microscope he had designed to move 35 individual atoms into a pattern that spelled the letters “IBM.” This was a groundbreaking accomplishment and brought nanotechnology into the realm of actual possibility for the first time. It showed that the physical properties of atoms, such as their electric or magnetic charges, can be manipulated and potentially used to build molecular-sized machines.

Eigler has also been involved in performing many other important experiments in the field of nanotechnology. In one, Eigler made an electrical switch that could be flipped on and off out of a single atom. In 2000, along with colleagues Hari C. Manoharan and Christopher P. Lutz, Eigler discovered a method for transporting information at the atomic scale by using the fact that electrons behave like waves. This process is now called “quantum mirage,” because, as Eigler says, “we project information about one atom to another spot where there is no atom.” In the future this may allow for data transfer within nano-sized computer circuits. “This is a fundamentally new way of guiding information through a solid,” Eigler notes. In 2002, Eigler’s research team at IBM created the world’s smallest logic circuit, which is less than a trillionth of a square inch in size. Instead of using traditional electronic components, Eigler and his team placed individual molecules of carbon monoxide on a flat copper surface. They then moved some of the molecules, setting off a series of collisions which moved other molecules. The final positions of the molecules gave the answer to the calculation that was being performed. Despite the fact that the technique is not practical, and will probably never form the basis of nanocomputing, it does show that calculations can be performed at the molecular scale. “It hints at what our future has in store for us,” Eigler says. “We’re paving the way for the future nanotechnicians.”Dr. Eigler has received numerous awards for his groundbreaking work, including the 1999 Nanoscience Prize.

Retrieved from "https://ethw.org/w/index.php?title=Don_Eigler&oldid=154689"
Categories:
This page was last edited on 12 April 2017, at 13:51.
About ETHW
Policies and disclaimers