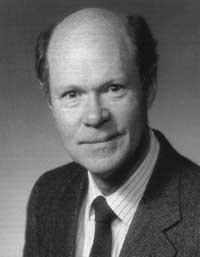 Robert Woodrow Wilson was a co-winner of the 1978 Nobel Prize in Physics with Arno Penzias. In the mid-1960s the team conducted research at Bell Laboratories that supported the Big Bang theory of creation of the universe.

Although his career took him to cosmic heights, Wilson’s beginnings were pretty well grounded. Wilson was born on 10 January 1936 and was reared in Houston, Texas. The son of an oil company employee, Wilson often accompanied his father to the Texas oil fields. Doing so put him in the midst of machinery and electronic equipment, a burgeoning interest for the young Wilson. Wilson attended Houston’s public schools and excelled in science and math. He went on to earn a degree in physics from Rice University in 1957 and then a Ph.D, also in physics, from the California Institute of Technology in 1962. His dissertation concerned the use of radio astronomy in the galactic mapping of portions of the Milky Way.

In 1963 Wilson left California for New Jersey, the site of the legendary Bell Laboratories. Once there, Wilson began working with Arno Penzias, the only other radio astronomer at Bell Labs. By 1964, Penzias and Wilson were using the most sensitive radio astronomy antenna available to conduct research in radio astronomy and satellite communications. Using their sophisticated equipment, Wilson and Penzias discovered that a faint signal pervaded all space. Because the signal was so faint and pervasive, they felt the noise could have any one of a number of sources. Systematically they eliminated the possibilities until they were sure that the entire universe itself was the source. Princeton University physicist Robert H. Dicke who had been the first to propose the idea of “cosmic background radiation” remaining from the initial big bang that gave rise to the universe concurred with the findings of Penzias and Wilson. This was a fundamental breakthrough in understanding the origin of the universe and Penzias and Wilson were rewarded with the 1978 Nobel Prize in Physics. (A third honoree that year was the Russian Peter Kapitza, who won for work unrelated to that of Wilson and Penzias).

After their pioneering research on cosmic background radiation, Wilson and Penzias both enjoyed prolific and long-term careers at Bell Labs. In addition to the Nobel Prize, Wilson has received many awards for his work. These include the Henry Draper Medal in 1977 and the Herschel Medal, also awarded in 1977.

Retrieved from "https://ethw.org/w/index.php?title=Robert_Wilson&oldid=147043"
Categories:
This page was last edited on 25 February 2016, at 18:02.
About ETHW
Policies and disclaimers