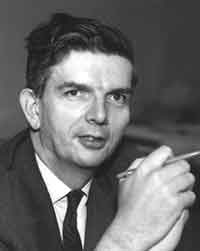 The idea that the universe began with a big bang was first proposed in 1927. Real support of the Big Bang theory, however, was not provided until 1965 when Robert Wilson and Arno Penzias detected a faint signal that pervaded all of space. They believed that this noise was created by the Big Bang itself. Although Penzias and Wilson first detected this noise, called “cosmic background radiation,” it was Princeton University physicist Robert H. Dicke who first proposed that such evidence of the Big Bang might still exist.

Robert Dicke was born on 6 May 1916 in St Louis, Missouri. Growing up in St. Louis, Dicke demonstrated an early interest in science and physics as he often played with small chemistry sets and electronic gadgets. He spent his formative years developing his interest in science, which he continued to explore as an undergraduate at Princeton University. After Princeton, Dicke began graduate work in nuclear physics at the University of Rochester and in the spring of 1941, he completed the research for his Ph.D. Dicke’s topic, which he had self-selected, was one of the first experimental studies of inelastic scattering of protons. Upon completing his research, it was clear that Dicke was on the right track to a promising career in science and he was offered a position at MIT’s Radiation Laboratory in 1941.

Dicke’s career at the Rad Lab was short lived as the Lab closed at the end of World War II. In 1946 Dicke received an appointment in Princeton’s Physics department. Princeton was where Dicke would make some of his most astonishing achievements. In the mid-1960s, when Arno Penzias and Robert Wilson, pioneers of the Big Bang Theory, announced they had detected an unexpected and relatively high level of radiation, Dicke proposed that this was cosmic radiation left over from the Big Bang.

Dicke also contributed to advances in radiation, atomic physics, quantum optics, gravity physics, astrophysics, and cosmology. In 1967, he was elected to the National Academy of Sciences. In 1970 he received the U.S. Medal of Science, the nation’s highest award for achievement in science. He was the recipient of many more prizes thereafter, including the Comstock Prize of the National Academy of Sciences (1973), and the NASA Medal for Exceptional Scientific Achievement (1973). He was a member of the National Science Board from 1970 to 1976. Dicke remained active well into his later years until Parkinson’s disease set in. He died on 4 March 1997.

Retrieved from "https://ethw.org/w/index.php?title=Robert_Dicke&oldid=146994"
Categories:
This page was last edited on 25 February 2016, at 15:59.
About ETHW
Policies and disclaimers