The Big Bang and the Early Universe 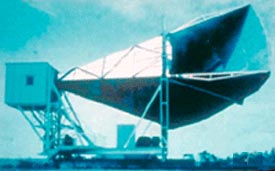 The Big Bang is a theory that describes the beginnings of our universe. It contends that the universe began with a primordial explosion that occurred about 13 billion years ago. The original core of the explosion was very small and tremendously hot, composed entirely of high-energy radiation. As the universe expanded and cooled over the first three minutes, protons and neutrons were created out of that energy. These formed the nuclei of hydrogen and its isotopes. After a million years or so, the universe cooled enough to permit electrons to bind with protons to form neutral hydrogen atoms, along with traces of helium and other light elements. Unlike free electrons, bound electrons in atoms can interact with radiation only at a few particular wavelengths. Thus, most of the original radiation created by the Big Bang became decoupled (that is, disconnected) from matter after the formation of hydrogen.

As the universe continued to expand over many billions of years, all components of this radiation (called cosmic background radiation) were stretched toward much longer wavelengths and lower energies. Today, most of that original radiation is concentrated in the microwave and millimeter wave portions of the electromagnetic spectrum. In 1965, Arno Penzias and Robert Wilson found this microwave background by accident while searching for sources of noise in satellite communications. (Although Penzias and Wilson were the first to find the cosmic background radiation, it had been predicted years earlier by Robert Dicke.) Their experimental discovery provided direct evidence for the Big Bang theory, establishing it as the scientifically accepted view of an evolving universe.

The framework for the Big Bang theory is provided by Einstein’s work in general relativity that united space and time. In 1922, the Russian mathematician Alexander Friedman corrected an oversight in Einstein’s calculations and demonstrated that an expanding universe would theoretically be possible. At about the same time, astronomer Edwin Hubble in California was making observations of distant galaxies that showed the universe to be expanding uniformly away from us in all directions. Russian-American physicist George Gamow and his colleagues predicted the existence of the cosmic background radiation in the 1940s, but that prediction languished in obscurity for many years until Penzias and Wilson made their momentous discovery.

Recent observations by the Cosmic Background Explorer (COBE) satellite and other instruments show that the intensity of radiation is not uniform from all directions in space. By studying data of this type, astronomers expect to learn how the large-scale structure of our present universe—galactic clusters separated by voids of empty space—could have evolved out of the original fluctuations created by the Big Bang.

Retrieved from "https://ethw.org/w/index.php?title=The_Big_Bang_and_the_Early_Universe&oldid=120334"
Categories:
This page was last edited on 28 September 2015, at 19:26.
About ETHW
Policies and disclaimers