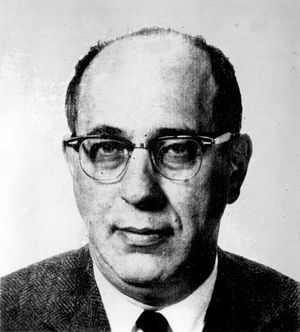 Louis Costrell was born in Bangor, Maine in 1915. He received his B.S. in Electrical Engineering from the University of Maine in 1939 and an M.S. from the University of Maryland in 1949. He joined Westinghouse Electric Corporation in 1940 as an electronics engineer and the Bureau of Ships, Navy Department, as .an electrical engineer in 1941. He has been with the National Bureau of Standards since 1946 and was Chief Radiation Physics Instrumentation Section, Radiation Physics Department.

He was instrumental in the development of a large number of nuclear detection instrumentations receiving the Department of Commerce Silver Medal "for contributions of unusual value to the Department" in 1955 for the development of a remote-control radiation monitoring system which measured radiation intensities in the vicinity of nuclear explosions. He also received the Outstanding Achievement Award in 1963 for work in the precision measurement of the gyromagnetic ratio of protons and the Gold Medal Award "for rare and outstanding contributions of major significance to the Department, the Nation, or the World" awarded in 1967 for proposing and implementing a system for standardization of electronic nuclear instrumentation modules with universal potential. Since 1967, over 95% of the modular nuclear instruments produced in the U.S. use Costrell's standards.

He was the author of over 40 technical articles and has presented numerous papers in the United States and abroad.

Mr. Costrell was Chairman of the U.S. AEC Committee on Nuclear Instrument Modules, in which capacity he developed the widely used NIM standard, and has collaborated with the ESONE Committee of European Laboratories in the development of the CAMAC interface standard.

Since 1962 he has served as Chief U.S. Delegate to numerous meetings of the Nuclear Instrumentation Committee of the International Electrotechnical Commission and has long been associated with the development of IEC, ANSI, and IEEE standards. He was a member of the IEEE Standards Board, Chairman of ANSI Committee N42 on Radiation Instruments, and a Technical Advisor to the U.S. National Committee of the IEC. He was the first recipient of the IEEE Standards Citation in 1972 for his effective leadership in the development of IEEE Nuclear Standards.

From 1960 to 1962 Mr. Costrell served as National Chairman of the IRE Professional Group on Nuclear Science, now the IEEE Nuclear and Plasma Sciences Society, has been a member of the Administrative Committee of the Society since 1955, and has been chairman of many of the Society's symposiums.

He was a member of the honorary societies, Tau Beta Pi and Phi Kappa Phi and was a Fellow of the IEEE and the Washington Academy of Sciences.

He had three grown sons and resided with his wife, Esther, in Silver Spring, Maryland.

Retrieved from "https://ethw.org/w/index.php?title=Louis_Costrell&oldid=172282"
Categories:
This page was last edited on 4 January 2019, at 20:38.
About ETHW
Policies and disclaimers