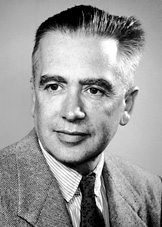 Emilio Gino Segrè was an Italian physicist and Nobel laureate in physics, who with Owen Chamberlain, discovered antiprotons, a sub-atomic antiparticle.

Segrè was born in Tivoli, near Rome, and enrolled in the University of Rome La Sapienza as an engineering student. He switched to physics in 1927 and earned his doctorate in 1928, having studied under Enrico Fermi.

After a stint in the Italian Army from 1928 to 1929, he worked with Otto Stern in Hamburg and Pieter Zeeman in Amsterdam as a Rockefeller Foundation fellow in 1930. Segrè was appointed assistant professor of physics at the University of Rome in 1932 and served until 1936. From 1936 to 1938 he was Director of the Physics Laboratory at the University of Palermo. After a visit to Ernest O. Lawrence's Berkeley Radiation Laboratory, he was sent a molybdenum strip from the laboratory's cyclotron deflector in 1937 which was emitting anomalous forms of radioactivity. After careful chemical and theoretical analysis, Segrè was able to prove that some of the radiation was being produced by a previously unknown element, dubbed technetium, and was the first artificially synthesized chemical element which does not occur in nature.

He was a colleague and close friend of Ettore Majorana, who disappeared mysteriously in 1938.

While Segrè was on a summer visit to California in 1938, Mussolini's fascist government passed anti-Semitic laws barring Jews from university positions. As a Jew, Segrè was now rendered an indefinite émigré. At the Berkeley Radiation Lab, Lawrence offered him a job as a Research Assistant -- a relatively lowly position for someone who had discovered an element -- for US$300 a month. However, in Segrè's recollection, when Lawrence learned that Segrè was legally trapped in California, he reduced his salary to US$116 a month which many, including Segrè, saw as exploiting the situation. Segrè also found work as a lecturer of the physics department at the University of California, Berkeley.

While at Berkeley, he helped discover the element astatine and the isotope plutonium-239 (which was later used to make Fat Man, the atom bomb dropped on Nagasaki). He found in April 1944 that Thin Man, the proposed plutonium "gun-type" bomb, would not work (because of the presence of Pu-240 impurities), and priority was given to Fat Man, the plutonium "implosion" bomb.

Segrè was also active as a photographer, and took many photos documenting events and people in the history of modern science. The American Institute of Physics named its photographic archive of physics history in his honor. Segrè died at the age of eighty-four of a heart attack.

Retrieved from "https://ethw.org/w/index.php?title=Emilio_Segrè&oldid=145672"
Categories:
This page was last edited on 22 January 2016, at 18:19.
About ETHW
Policies and disclaimers