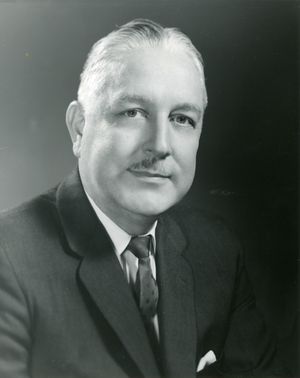 William Shoupp, born in Troy, Ohio, in 1908, joined Westinghouse in 1938, as one of five research fellows chosen in national competition. He was soon placed in charge of operations with the company's new Van de Graaff generator. He and his small research group discovered photofission and thereby showed that the atomic nucleus could be fissioned by gamma rays as well as by neutrons.

During World War II , Dr. Shoupp directed the work that led to the development of several important radar and radar countermeasure systems and components.

His major achievements in harnessing nuclear energy occurred between 1948 and 1961. As director of R&D for the Bettis Atomic Power Laboratory, he provided the technical foundation for the design and construction of the reactor core for the first atomic-powered ship, the Nautilus, and then for the first atomic power plant at Shippingport, Pa.

Later, as technical director of Westinghouse's Atomic Power Division, he provided the technical direction for the development of the reactor for the Yankee atomic power plant and several other nuclear plants. During this same period, Dr. Shoupp and a small group founded, in 1954, the American Nuclear Society, of which he was later to serve as president.

He was elected a member of the National Academy of Engineering in its formative years, and has served as its vice president since 1973. When Dr. Shoupp retired from the Laboratories, his 1938 PhD. degree had been embellished with honorary degrees from Miami University and the Indiana Institute of Technology. Among his many other honors were an alumni award from the University of Illinois, the Westinghouse Order of Merit, and the Industrial Research Institute Medal.

In his "retirement," Dr. Shoupp served as a consultant to several private and governmental groups, as vice president of the National Academy of Engineering, and as a director of Vesuvius Crucible Company. He was also chairman of the Federal Energy. Advisory Committee of the Department of energy.

William Shoupp and his wife, Kathryn, resided in Pittsburgh, with a small farm nearby reserved for reading, relaxing and target shooting, to go along with Dr. Shoupp's other hobbies of golf and watch repair. Their only child, William Joseph, finished his work for the Ph.D. degree in Microbiology at West Virginia University.

Retrieved from "https://ethw.org/w/index.php?title=William_E._Shoupp&oldid=172797"
Categories:
This page was last edited on 22 January 2019, at 18:54.
About ETHW
Policies and disclaimers