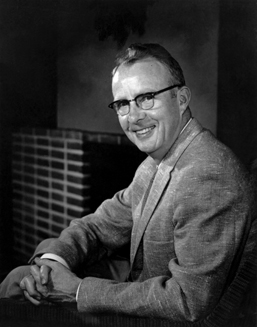 Luis Walter Alvarez was born on 13 June 1911 in San Francisco. His father was a doctor with a substantial medical research career; his mother was a missionary’s daughter who had trained as a grammar-school teacher before deciding to marry. Machines fascinated Alvarez from childhood: at age four he was transfixed by the Machinery Hall at the San Francisco Pan-American Exposition, and the electrical equipment in his father’s laboratory constantly attracted him. By the time he was ten, he could use all the small tools in his father’s little home shop, measure resistances on a Wheatstone Bridge, and construct circuits. The next year he and his father built a crystal radio together. Alvarez’s family moved to Rochester, Minnesota while he was in high school; there he first heard of physics, and his father suggested a career in the area. Alvarez improved his mechanical skills by two high-school summers spent in the Mayo Clinic instrument shop.

Alvarez went to the University of Chicago for college (1928-32) and graduate school (1932-36). When he arrived, he still intended to be a chemist; by junior year, appalled by the stinks involved in chemistry, and convinced he was a better physicist than he was a chemist or a mathematician, he had switched majors. As his senior thesis he built a Geiger counter—then only recently invented and not yet in commercial production. This was to set the pattern for his career in physics: Alvarez had a knack for thinking up practical experiments to test the latest physics theories, and for building the devices necessary to make these experiments. In a time when the equipment available for physicists was still extraordinarily primitive, this mechanical flair served him well.

In graduate school, while assisting the physicist Arthur Compton, Alvarez adapted his Geiger counter to detect cosmic rays and make some of the first descriptions of their characteristics. In 1936, the same year that he married Geraldine Smithwick, he moved to Berkeley to work with Ernest Lawrence at his cyclotron laboratory. In his first year there he designed the magnet for the new cyclotron; in the following years he devised experiments that demonstrated the capture of orbital electrons by nuclei, measured the energy of neutrons by calculating their velocity, and demonstrated that helium 3 was stable and tritium (hydrogen 3) radioactive. This promising career in physics, however, was interrupted in 1940. For the next five years Alvarez would work for the US military as a scientific researcher. These war years would produce the most significant inventions of his career.

Earlier in 1940 the British government, desperate to defeat Nazi Germany, had given some of its greatest military scientific secrets to the United States. Among them were British radar systems and the recent development by John Randall and Henry Boot of the cavity magnetron, which enormously increased the resolution and range of radar. In November 1940 Alvarez moved to the Massachusetts Institute of Technology (MIT) Radiation Laboratory, where he began to work on military radar systems, making use of the British advances.

One of Alvarez’s first contributions was to realize that radar could be used to detect submarines as well as planes. German submarines, however, initially came up with effective counter-measures: quickly detecting the radar pulses bouncing off their hulls, the submarines could tell when a plane was approaching their position and dive in time to avoid bombing. Alvarez came up with an unmatchable counter-counter-measure: the VIXEN system, which minimized radar pulse power after initial submarine detection, according to a set mathematical ratio, so as to disguise from the submarines the plane’s approach. This innovation by Alvarez tipped the military balance decisively in favor of Allied planes, and contributed substantially to the Allied victory in the Battle of the Atlantic.

Alvarez also worked to develop an antiaircraft fire-control radar system. While working on the aircraft-tracking components, it occurred to him that it could be adapted from shooting down enemy planes to helping land friendly planes in night, fog, and other blind conditions. It took till 1943 for Alvarez to perfect his Ground-Controlled Approach (GCA) system; in the process, he designed the first microwave phased-array antenna. When completed, the GCA helped land hundreds of Allied planes safely during the remainder of the war, and its principles were incorporated into air-traffic control systems worldwide thereafter.

By mid-1943 Alvarez had become head of the Special Systems Division of the MIT Radiation Laboratory, a.k.a. “Luie’s Gadgets.” He contributed significantly to the Microwave Early Warning (MEW) system and the EAGLE blind-bombing system, but he did not stick around to see them completed. Wary of being trapped in an administrative position, the 32-year-old Alvarez hankered to return to scientific research. In the summer of 1943 he left the Radiation Laboratory and radar work. He would return to physics—nuclear physics. Soon Alvarez would be at Los Alamos, working on the atomic bomb.

Retrieved from "https://ethw.org/w/index.php?title=Luis_Walter_Alvarez&oldid=146542"
Categories:
This page was last edited on 3 February 2016, at 19:04.
About ETHW
Policies and disclaimers