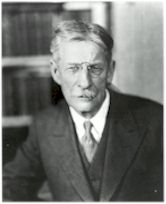 Frank Sprague was born on 25 July 1857 in Milford, Conn. In high school, Sprague showed an aptitude for mathematics, chemistry and physics. Intending to take advantage of the free education offered at West Point, Sprague travelled to Springfield to take the entrance exam. However, when he arrived, he found that the exam that morning was for acceptance to the Naval Academy at Annapolis, instead of for West Point. “A career afloat was far from my ambition,” Sprague later recounted, but it was a fortunate substitution, as the Naval Academy offered what was at the time probably the best training in the country for an electrical engineer. In 1874, at the age of seventeen, Sprague became a midshipman. While at the Naval Academy, Sprague became interested in dynamos and in the possibilities offered by electric motors, and he graduated from the Naval Academy in 1878 with high honors. In 1883, Spraque resigned from the U.S. Navy and went to work for Thomas Edison as his technical assistant. Sprague developed a mathematical determination of electrical distribution which was useful in planning and balancing the distribution circuits of Edison’s central electricity plants. Edison’s focus at the time was on electric lighting, and Sprague believed that the Edison companies were overlooking the many possibilities of electricity as motive power. Within a year, Sprague founded the Sprague Electric Railway and Motor company, which sold motors manufactured by the Edison Machine Works.

Financed by a group of New York venture capitalists, Sprague obtained a contract in 1887 to build a street railway in Richmond, Va. Richmond, built on hilly terrain at the fall line of the James River, presented a number of obstacles to transportation. At the time, Richmond had one horse-drawn streetcar line, which provided limited, and, apparently, not very customer-friendly, service to the older neighborhoods. The New York financiers saw an opportunity to establish a second line in competition. The proposed route of the Richmond Urban Railway was twelve miles in length, with sharp curves and grades as steep as ten percent. For routes with steep grades, cable car systems had been the usually preferred alternatives to horse power, but cable systems involved laying expensive infrastructure, and were inefficient to operate because only eighteen percent of a cable car system’s stationary engine’s power was applied to moving the cars, the remainder of the energy being consumed by moving the weight of the cable. In the era of draft animals, urban transportation could be paralyzed by the outbreak of animal diseases.

Sprague convinced his financial backers and the Richmond politicians that electric traction was the answer. There had been earlier experimental electric railways, beginning in Berlin in 1879, but most of these were set up as in accompaniment to electrical exhibitions (Berlin 1879, Paris 1881, Crystal Palace 1882) or as tourist attractions (Brighton 1884), and they were usually dismantled after the exhibitions closed.

The contract for the Richmond Union Railway specified a construction period of ninety days, which — despite the obstacles of the hilly terrain, and also Sprague’s coming down with typhoid fever during the summer as it was under construction — Sprague very nearly fulfilled. He later referred to it as “a rather foolish contract,” in that he had agreed to produce in ninety days an amount of equipment equal to the total existing in the world at that time. He set an example of efficiency which today’s public transport projects – which often take years or even decades to plan and build — could do well to emulate.

The Richmond Union Passenger railway began revenue service 2 February 1888, and remained in service until 25 November 1949. The Sprague system featured motors mounted beneath the cars and centered on the axles, with both motors controlled by a single switch inside the car. Variations in the speed of the motors was obtained by varying the resistance of the field winding of the motors traversed by the current. Power was supplied by an overhead wire. Many of these features were used on subsequent light railways. General Electric and Westinghouse adopted many of its features on their railroad equipment. Its effect on the development of public transportation was enormous, as it showed the public and civic officials that electric traction was reliable and safe, and demonstrated to investors that financing electric transportation was feasible. Within two years, Sprague’s company had closed contracts for one hundred and ten street railway systems in towns and cities across the United States, as well as in Italy and Germany. In 1890 his company was absorbed by Edison General Electric.

The Richmond Union Passenger Railway was designated an IEEE Milestone in Electrical and Computing in February 1992.

In addition to his developments in electric traction, Sprague made enormous contributions to public transportation in the areas of control and safety, without which high-capacity operations would not be possible. Sprague developed a system of automatic signal and brake control for railroads, and an auxiliary train control to take charge if the engineer made a mistake. He was active in the planning and construction of New York City’s subway system. It is hard to imagine urban and suburban life as being at all livable without Sprague’s many contributions. The mass transportation systems he pioneered have given us alternatives in the face of the present rise in gasoline prices. Sprague believed that “Transportation is the key of civilization…for without it our existing social structure would collapse.”

Among Sprague's other achievements are the introduction of electric high speed and home elevators --in 1892 he formed the Sprague Electric Elevator Co., which became part of the Otis Elevator Co. --, the development of the automatic signaling and brake train control systems, and the invention of the method for operating elevators on the same rails in a common shaft. He took a keen interest in electrical traction in general, advocating underground rapid transit through the whole period of its development in New York City, and serving on the Grand Central Electrification Commission for the electrification of railroads. Sprague was also a pioneer in design and production of miniature electric power units suitable for machine tools, printing presses, dentist's drills, and labor-saving conveniences in the home.

Sprague was active in IEEE’s predecessor body, the American Institute of Electric Engineers (AIEE), serving at various times as committeeman, as vice president in 1890-92, and president in 1892-93. He represented the AIEE and the Inventors Guild on the U.S. Navy Consulting Board, and was engaged in developing fuses and air and depth bombs during World War I. He was a member of many technical societies, president of the New York Electrical Society, the American Institute of Consulting Engineers, and the Inventors Guild, and the recipient of many awards. He received the Edison Medal in 1910, "For meritorious achievement in electrical science, engineering and arts as exemplified in his contributions hereto." Sprague was married twice, to Mary Keatinge and to Harriet Chapman Jones. He had three sons and one daughter. He died on 25 October 1934 and is buried at Arlington National Cemetery.

Retrieved from "https://ethw.org/w/index.php?title=Frank_J._Sprague&oldid=145783"
Categories:
This page was last edited on 25 January 2016, at 19:26.
About ETHW
Policies and disclaimers