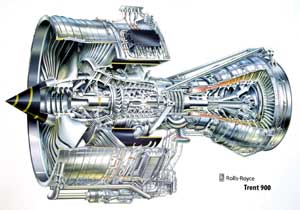 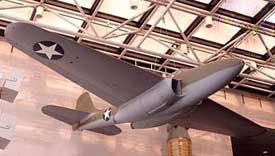 From the Wright brothers’ first to the airplanes used at the start of World War II, aircraft were powered by engines that worked by repeatedly injecting a small amount of gasoline (or other fuels) inside a cylinder and then igniting it. The resulting bursts of energy turned a propeller, which acted like a powerful fan to push the aircraft along.

The latter years of World War II ushered in the age of the jet engine. A jet engine works quite differently than earlier engines. Imagine standing on a wheeled platform with a bucket of baseballs. When you throw a baseball the platform will roll you in exactly the opposite direction. Throw the baseballs one after another, and you will be pushed down the road. This is explained by Newton’s third law of motion (for every action, there is an equal and opposite reaction). A jet engine does something similar. Fuel is burned and the exhaust gasses are released in one direction, which drives the engine in the opposite direction. Rocket engines also operate this way, although they carry their own supply of oxygen so they can burn fuel in outer space.

The idea of a jet engine occurred first to Englishman and aeronautical student Frank Whittle in 1928. By 1937 he was able to demonstrate it in the laboratory, and in 1941 the British Royal Air Force began using its first jet aircraft, the Gloster E.28/39. Meanwhile, three German engineers had arrived at the same concept independently in the early and mid-1930s. One of them, Hans von Ohain, beat the English in the race to build the world’s first jet aircraft, flying his HE-178 experimental model in 1939. The first U.S jet was the Bell P-59A Airacomet, completed in 1941. Other jet aircraft followed before the end of the war, such as the famous Messerschmitt Me 262.

These jet aircraft, used principally as fighters, had a tremendous speed advantage over existing planes, but had limited range and less-than-ideal handling. Moreover, they were not produced in sufficient numbers to have a large effect on the course of the war. They did, however, fundamentally redirect the development of both military and commercial aviation after the war.

Jet engines grew larger and more powerful after World War II and became the standard form of aircraft engine for most military and commercial craft. The first jet passenger aircraft used for commercial flights was the De Havilland Comet, a British craft first used in 1949. Other types of jet engines were also introduced. The “turboprop” engine, invented around 1938 and first used in 1950, was used to drive a conventional propeller. A jet engine used this way is ideally suited for helicopters and slower aircraft such as cargo transports.

In addition to aviation, other uses for the jet engine were soon found. For example, in 1946 the General Electric Company adapted its turboprop engine to run an electric generator. By 1948, the company introduced a combination turboprop/generator that was designed to power a locomotive engine. Since that time, this type of electric generator, known as a “gas turbine,” has also been used in many places as the basis of small electric power plants.

With the commercial use of the turboprop in 1950, there were now two kinds of jet engines, and the older type was renamed the “turbojet.” Turboprop and turbojet engines were soon joined by the turbofan, first used in 1960, which has a propeller-like device inside the engine assembly. This combines the best features of a propeller-driven aircraft and a pure turbojet. This type of engine is used today on most commercial airliners and military fighters. Finally, there is the ramjet engine, which consists simply of a specially shaped tube supplied with fuel. If air enters the tube at a high enough speed, it combines with the fuel and ignites, blasting its exhaust out the back of the tube and thrusting the engine (and anything attached to it) forward. It is used for applications such as missiles, which are launched by rocket boosters but are powered for the rest of their trip by ramjet engines. The first ramjet-based missile was the German V1 missile developed during World War II. The V1 used a special type of ramjet called a pulse jet, where the engine burns fuel in short spurts, cutting on and off as needed.

Jet engines today are a mature technology, meaning that they are not evolving as rapidly as in the past. However, they are not perfect. They consume vast quantities of fuel (jet fuel is similar to kerosene, derived from petroleum) and contribute significantly to airborne pollution. They are also extremely noisy, causing problems for people who live near airports. They seem to be in little danger of falling out of use, however, because there is no practical substitute for them.

Retrieved from "https://ethw.org/w/index.php?title=Jet_Engine&oldid=154665"
Categories:
This page was last edited on 12 April 2017, at 13:51.
About ETHW
Policies and disclaimers