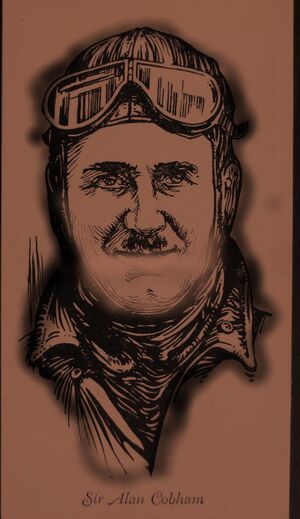 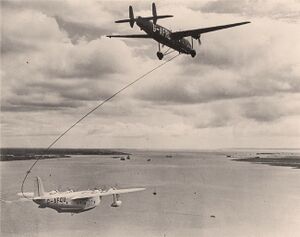 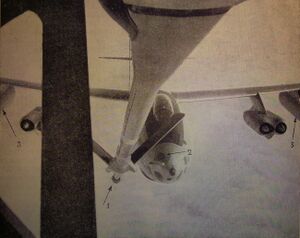 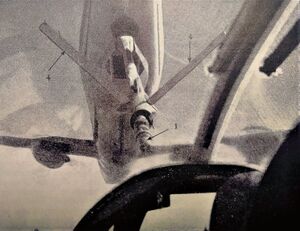 Fig. 5 Example of the distribution of loads and aerodynamic actions in a tanker with wing tanks in the fuselage 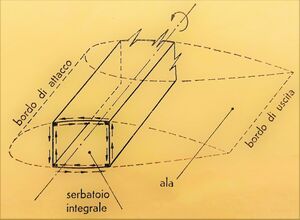 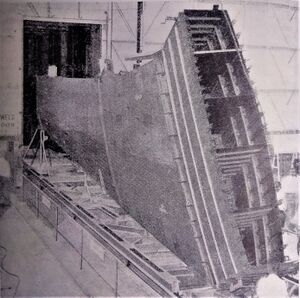 Fig. 7 Wing conveyed into an electric oven to undergo a Scotch-Weld process to insulate and seal the tankers.

Almost any transport aircraft that has certain characteristics and undergone the appropriate modifications can be used as air tanker. In the past, no aeronautical company has ever built aircraft that can be used exclusively for the transport of liquid fuels with constructive and functional specifications different from those of ordinary cargo aircraft - except for the internal layout and any ancillary fuel storage and emptying equipment. The military air forces of large-size aircraft manufacturing countries have always considered the design and construction of a bomber that is convertible into a tanker to be more economical than the construction of an aircraft designed for fuel transportation from scratch. Over the decades, military cargo or bombing planes have been converted to tankers, but they have never served as civil aviation aircraft for reasons of military confidentiality and security. It is also for these reasons that the construction data and information of air tanker models manufactured in the recent decades are not fully available, and it would be forbidden to disclose them.

In the beginning, the transportation of fuel by air did not come from military needs, but rather for in-flight refueling to serve aeronautical long-distance competition or prolonged commercial-civilian aircraft flights. The first attempts took place in the 1920s in the United States, however the ordinary use of this pioneering and complex practice was implemented in the early 1930s in the UK from the work of Sir Alan Cobhan[2] (Fig.1). In 1934, he gained the technical expertise and gathered enough capital to establish the Flight Refuelling Ltd in 1934, which in 1939, concluded a contract with Imperial Airways[3] for the refueling of commercial aircraft flying Atlantic crossing routes.

In the early years, refueling in flight was carried out via a flexible cable ending in a rubber ball weighed down by a lead ballast that slipped from the bottom of the tanker airplane. The purpose of the rubber ball was to make the end of the tube clearly visible to the pilot of the refueling plane, which in case of accidental contact with the propeller would not have damaged it. An operator equipped with a hooked rod leaned from the top of the cockpit of the aircraft into which the kerosene was to be poured, hooking the cable and manually inserting the sleeve into the tank.

Later in the 1940s, two different systems were experimented. In the first, the tanker released a long flexible duct fitted at the end with a coupling member strongly ballasted so that it remained suspended in a vertical line. The aircraft took a straight course at constant altitude, without visual contact with the aircraft to be refueled - with which it communicated only by radio. The aircraft to be refueled released a long cable but less ballasted so that it was arranged according to a different curvature. The pilot steered the aircraft so that the coupling between the ends of the hose and the cable took place. Once the fuel transfer was done, the two magnetic ends disconnected, and the cables were recovered from their respective aircraft.

In the second system, the refueling conduit was wound on a rotating reel placed under the fuselage of the tanker (Fig.2). This passed under the port wing and was supported in position at the end of the wing itself by a special support that allowed it to slide under a certain traction effort. The duct ended with a protruding hook positioned above the edge of the wing insertion to the fuselage. At this point, the tanker pilot starts a light veering maneuver to the right; in this way the end of the cable runs along the wing of the tanker until it got caught in the hook of the refueling tube which in doing so unwound automatically from the reel. The other aircraft slowly withdrew the end of the nozzle and hooked it, dropping to the altitude just below the tanker, and eventually loading the kerosene. Both operations were difficult to perform (the greatest danger came from the propellers): they required specific training and favorable weather conditions.

Evolution of the air tanker: refueling in flight in the 1950s

Further momentum to the development of materials science and engineering in avionics came in the United States, in conjunction with the new needs that emerged during the Korean War. It was in those years that the refueling system called flying pole (patented by Boeing and still in use today) was perfected (Fig. 3). This system guaranteed a flow rate of one thousand liters per minute and could be implemented also with adverse weather conditions. In this operation, the aircraft to be refueled approaches the tanker keeping behind it at the same speed and points the nose a few meters away from its tail at a slightly lower altitude. From a special cockpit located at the rear end of the fuselage, the refueling operator lowers a semi-rigid sleeve ending with two long V-shaped wing appendages (wing planes) to generate enough lift to facilitate its direction (Fig. 4). The sleeve contains a large diameter flexible tube ending with a magnetic valve that fits into the jet's fill port.

Calculations for the air tanker structure concerns the positioning of the bulk of the fuel load, which is generally located in the wings rather than the fuselage. The weight of the wings and it components (spars, ribs, diaphragms, linings, etc.) is directly supported by the aerodynamic thrust, which can be distributed exactly according to the weight of the wing sections (Fig. 5).

In the 1950s and 1960s two types of reservoirs were developed: integrated and non-integrated. The first are obtained by making a section of the aircraft structures watertight (Fig.6). Non-integrated tanks, on the other hand, are built separately and subsequently mounted. They can be manufactured with three different materials: flexible rubber, rigid non-metallic, and light alloy.

From the early days of the aviation industry, builders of bombers/tankers considered the lightness of the frame as a first requirement, together with its adaptability according to the customer's needs. Since the mid-1950s, this fact fostered more research and development for integrated tank wings (Fig. 7).

Each aircraft producing country developed its own code for structural safety tests and fire prevention systems. However, since the late 1950s, the most frequently used test parameters are those derived from the protocol in use by the US Air Force. It consists of 15 tests:

As for the fire protocols in air tankers, still in the early 1960s did not exist strict international standards, however the most common systems included:

Retrieved from "https://ethw.org/w/index.php?title=Air_tankers&oldid=185925"
Categories:
This page was last edited on 13 August 2021, at 19:08.
About ETHW
Policies and disclaimers