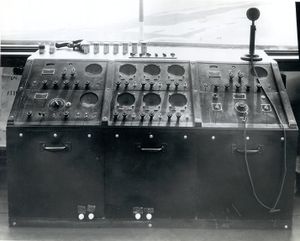 RCA RE-141 in airport for air traffic control 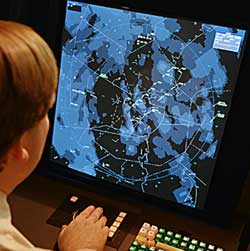 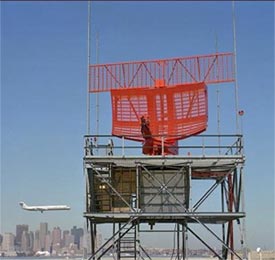 The terminal area surveillance radars that replaced the Ground Control Approach (GCA) rotating-antenna radars. The antenna on top is used for interrogating transponders (secondary surveillance). The one on the bottom is used for primary radar surveillance.

In 1943 U.S Air Force air traffic controllers began routinely using Ground Controlled Approach (GCA) equipment to help military pilots land safely in poor visibility. GCA employed a pair of oscillating radar antennas with narrow “pencil beams,” one scanning side to side (azimuth), the other up and down (elevation). A controller observed the precise angle returns from these azimuth and elevation radars and radioed landing guidance to the pilot. GCA also included a 360-degree rotating radar for surveillance of the entire terminal area. This radar used a “fan” beam (narrow in azimuth and tall in elevation) that detected planes out to about 20 miles from the airport and up to altitudes of about 3000 meters (10,000 feet).

Civil controllers first used military GCA equipment at LaGuardia Airport in 1945, where it helped triple the landing rate to 15 planes per hour. GCA experienced occasional problems, but it worked well enough so that by 1952 it was being used at many airports. By the mid-1950s, however, GCA landing guidance components were being replaced by a new landing aid called the Instrument Landing System (ILS). ILS uses similar course guidance principles, but uses receivers in aircraft that display course deviation directly to the cockpit.

Another system developed during World War II, and which had great impact on civil aviation, was the Identification Friend or Foe (IFF) system. IFF depended on special radar receiver/transmitter units located in friendly aircraft. These radar “transponders” responded to coded radar “interrogations” with coded replies to indicate that they were not hostile aircraft.

In the late 1950s it was proposed that IFF technology be used for surveillance of civil aircraft. The use of transponders increases the detection range of the radar, eliminates clutter interference from other reflectors, and provides a means of aircraft identification and altitude reporting. In the early 1960s the U.S Federal Aviation Administration (FAA) published a national standard for air traffic control interrogators and transponders. By the end of the decade over 200 ground-based interrogators were in use in the U. S and the FAA made it mandatory to equip aircraft with transponders before they could operate in positive controlled airspace at high altitudes and near major airports.

In the 1970s the FAA enlisted the aid of the MIT Lincoln Laboratory to upgrade the original air traffic control radar beacon system to improve its surveillance performance in dense airspace and to expand its coded transmissions to transmit air traffic control data between the ground and individual aircraft. (See Oral History with Lou Meren This “discrete addressed” beacon system uses ground sensors and airborne transponders that are interoperable with the original beacon system, but which achieve surveillance accuracy, capacity, and reliability that is adequate to support automatic safety warning functions for controllers and pilots.

The development of the Global Positioning System (GPS) has permitted extremely accurate positioning of aircraft. This is especially useful in handling approach (landing) and departure (taking off) control of aircraft at busy airports.

It has also in some cases permitted airliners to fly more direct routes between origin airports and destination airports. Free Route Airspace (FRA) are zones where airliners can plan routes that are more efficient than the air traffic services route network. This results in time and fuel savings.

Air Traffic Control Radar is generally divided into TRACON (Terminal Radar Approach Control) which directs aircraft during departure, descent, and approach to and from airports, and En Route controllers, which direct the aircraft during the high-altitude main part of their flights.

The story of the invention of the Klystron.

Retrieved from "https://ethw.org/w/index.php?title=Air_Traffic_Control_and_Radar&oldid=166365"
Categories:
This page was last edited on 12 September 2018, at 15:39.
About ETHW
Policies and disclaimers