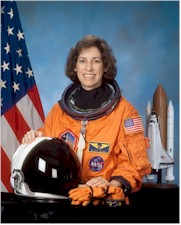 Born May 10, 1958 in Los Angeles, Ellen Ochoa grew up with four siblings in La Mesa, California. From an early age, Ochoa showed a keen interest in and aptitude for math and science, as well as music. In 1980, she obtained a Bachelor of Science Degree in Physics from San Diego State University, where she graduated at the top of her class. After graduation, she considered pursuing a career as a professional flutist, but ultimately decided to continue her education in science. She received her Master's degree in 1981, and her PhD in 1985, both in electrical engineering from Stanford University. The work she began as a PhD student led to the development of an optical system that improved quality control in manufacturing by detecting defects in repeating patterns.

While working toward her doctorate, Ochoa watched with interest as Sally Ride became the first female astronaut in the U.S., encouraging her to pursue a career in the aerospace industry. After receiving her PhD, she continued her work on optics as a research engineer at Sandia National Laboratories in Albuquerque, New Mexico, where she co-developed three patented optical devices. The first, an extension of her doctoral work, inspected objects for defects. The second used optical technology to identify objects, and the third system minimized image distortion. She later led a research group of 35 scientists at the Intelligent Systems Technology Branch at NASA's Ames Research Division, in her home state of California. There she worked on developing optical and computer systems for automated space exploration.

The systems she developed at Sandia and Ames would prove to have important applications for data gathering and evaluating equipment safety, and in recognition of her contributions to aerospace technology, she was accepted into NASA's astronaut training program at Johnson Space Center in 1990. The following year, Ellen Ochoa officially became a U.S. astronaut, and soon, the first Latino woman in space. In April of 1993, Ochoa traveled into space for the first time, as Mission Specialist on the STS-56 Discovery Space Shuttle Mission. In November 1994, she returned to space on Shuttle Mission STS-66 as Payload Commander. Her work on both expeditions , during which she operated satellites ATLAS-2 and 3, contributed valuable information about the damage to the Earth's ozone layer. Much of her recent work with NASA has been devoted to the International Space Station project; she oversaw the U.S.'s participation in the project for two years. She continues to conduct research for NASA, and travels the country speaking to a variety of groups, many of them students.

Over the course of her distinguished career, Ellen Ochoa has received seven awards from NASA, in addition to the Women in Aerospace Outstanding Achievement Award, the Hispanic Engineer Albert Baez Award for Outstanding Technical Contribution to Humanity, and the Hispanic Heritage Leadership Award. Other awards include the Distinguished Service Medal, Exceptional Service Medal, Outstanding Leadership Medal, and four Space Flight Medals. In 1999, she was selected by then President Clinton to serve on the Presidential Commission on the Celebration of Women in American History. She is married to Coe Fulmer Miles, with whom she has two children, and currently serves as Director of the Lyndon B. Johnson Space Center in Houston, Texas.

Ochoa is also a member Member of the Optical Society of America (OSA) and the American Institute of Aeronautics and Astronautics (AIAA).

Retrieved from "https://ethw.org/w/index.php?title=Ellen_Ochoa&oldid=145660"
Categories:
This page was last edited on 22 January 2016, at 17:36.
About ETHW
Policies and disclaimers