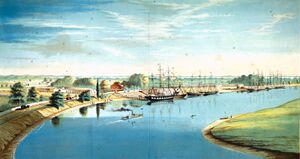 Fig.1 The docks of Philadelphia on the Delaware River 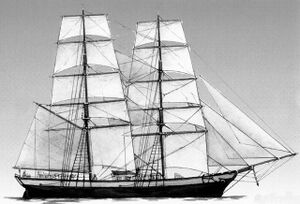 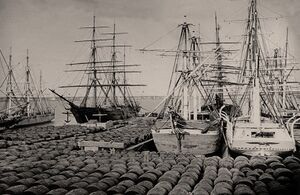 Fig.3 Bulks of petroleum barrels ready to be loaded on board and shipped to Europe 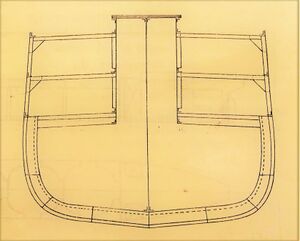 Fig.4 Diagram of the disposition of the tanks, independent from the hull, in the Atlantic and Charles sailing ships 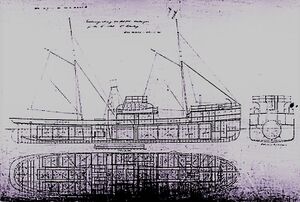 Fig.6 Seal of the Armstrong-Whitworth Works 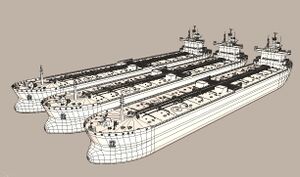 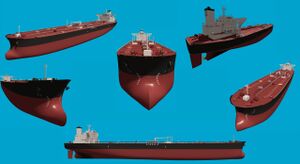 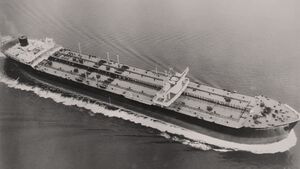 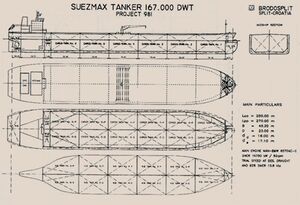 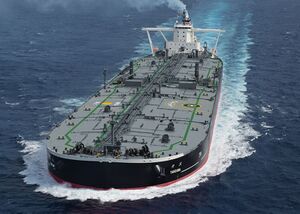 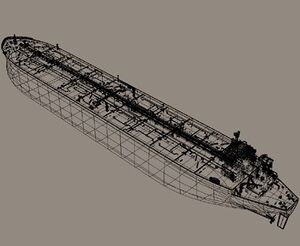 In the early decades of the petroleum industry, crude petroleum transportation by sea was implemented by means of regular cargo ships in whose holds barrels and containers of various kinds (e.g., tin cans) were allocated. The first major shipment of petroleum and refined products took place in November 1861, when the 224-ton brigantine Elizabeth Watts delivered 1,329 barrels (about 182 tons) of crude and refined products from Philadelphia to the UK (FIG.1-2). Already in 1864, on the same route were shipped barrels for a total of 16,000 tons (about 2,182.810 barrels) (FIG.3). At this rates, the hauling of barrels was predicted to have a short life because it had relevant disadvantages such as fire and explosion hazard, and highly reduced payload volume of the hold due to the barrels.

In the mid-1860s, US shipyards assembled early tanker prototypes with independent, or partly hulled, tanks to increase capacity and safety. These efforts resulted in the wooden sailing ship Atlantic, a 45 meter long brigantine, delivered in 1865; and, in 1869, the 794-ton iron ship Charles. Both had a set of separated tanks designed to store crude and refined oils (FIG.4).

This arrangement had serious drawback: the large gap between the hull and the walls of the tanks could be easily saturated with petroleum vapors, generating explosions and fires despite the presence of ventilation systems. Few other vessels of this kind were built, but with little success, and the transport of petroleum typically continued to be barrels stowed in ordinary cargo ships. Regardless of the result, ships like the Atlantic and the Charles were trailblazing prototypes that paved the way for the idea of large tanks and the utilization of metals.

Until the early 1890s, the only two petroleum exporting countries were the United States and Russia. The former provided about 80-90% of the European consumption, mostly through impractical and dangerous naval transport. Russia, on the other hand, had an advantage due to the size of Caspian Sea and the easily navigable river courses connecting the rich Caucasian filed from the main centers of consumption. This is the reason why Tsarist Russia was able to assemble ships with tanks integrated into the hull in series beginning in 1878.

The first of this new class of tankers was named the Zoroaster (FIG.5) This ship was built with Bessemer-process[1] forged steel while the petroleum holds were iron. For its time, the tanker ship Zoroaster was quite technologically advanced, being reinforced with ballast tanks to have a better balancing during navigation in case of adverse weather. The Zoroaster measured over 180 feet (55 meters) lengthwise with a breadth of over 35 feet (11 metres), for a draught of about 10 feet (3.5 metres). Around 240 gross tons (1760 barrels) of crude and kerosene could be ferried by the vessel between the provinces of Astrakhan and Baku along the River Volga and the Caspian Sea route. In 1900, the Caspian sea was crossed by 134 units built in the same way, for a total payload of 48.848 tonnage.

Another important landmark in the advancement of tanker technology was achieved in the early 1880s, when German-British capitals and naval engineering met at the Armstrong-Whitworth Works[2] in Newcastle-upon-Tyne, United Kingdom (FIG.6.). The first oil tanker with integrated hull tanks capable of crossing oceans with a relative safety, anticipating many of the modern schemes, was designed in 1884 by naval engineer Henry Frederick Swan.[3] Built mostly in steel with innovative safety systems and an independent pumping station on board, the construction was laid down in the dry docks on November 25th, 1885. The German shipowner and petroleum trader W.A. Riedmann of Geestemünde[4] came across this project and decided to finance and acquire the first exemplar. Named Gluckauf ("Good Luck" in English), the tanker was launched on June 16th, 1886, powered by a 992 H.P. steam propulsor (11 knots maximum speed) and carried also sails as back up equipment (FIG.7).

At 318 feet long, 37-foot beam and 19-foot draft, the Gluckauf was equipped with 14 tanks arranged in 7 separate compartments divided longitudinally by a continuous bulkhead. The pumping system and expansion boxes could unload the ship in only 12 hours. Conceived to serve as seafaring tanker to carry oil from the United States to Europe, in the summer of 1886 it delivered its first cargo of 2,880 tons of crude loaded in Philadelphia to Geestemünde. The Gluckauf marked a great turning point in the maritime oil transportation, however major structural difficulties remained, like the inertia of the liquid cargo and the stagnation of the product.

Problems like these could only be overcome through new theoretical, structural studies, and advancements in materials sciences. Close to the end of the nineteenth century, some solutions were eventually devised and implemented; among the most effective were the self-supporting tanks called circular and cylindrical. With the first solution, the oil was contained in cylindrical tanks with a circular section arranged vertically in the holds, extending from the double bottom to the deck (FIG.8). With the second, oil was equally contained in cylindrical tanks having a square section with widely rounded edges (FIG.9). These solutions were functional, but still have the disadvantage of not fully exploiting the volume of the cargo area.

Eventually, in the early 1900s, the structural and stagnation problems of ships with integrated tankers were successfully addressed by naval engineers: the assembly of the Narragansett in Scotland by the Scott & Co. shipyard of Greenock, in 1903, marked the definitive affirmation of the integrated tank construction technology (FIG.10). The subsequent evolution in naval engineering applied to oil tankers was based on 5 principles:

Vassiliou, Marius. S. 2009. The A to Z of the petroleum industry. Lanham, Md: Scarecrow Press.

Retrieved from "https://ethw.org/w/index.php?title=Oil_tankers&oldid=185972"
Categories:
This page was last edited on 13 August 2021, at 19:30.
About ETHW
Policies and disclaimers