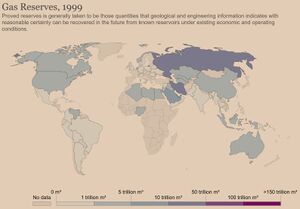 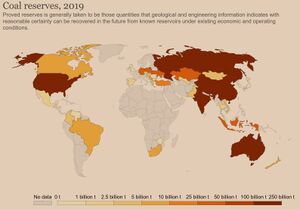 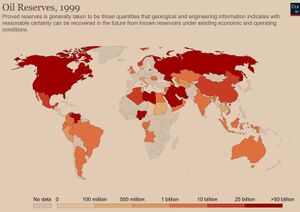 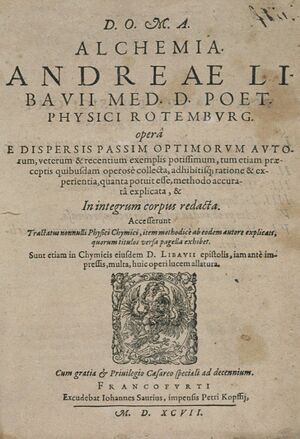 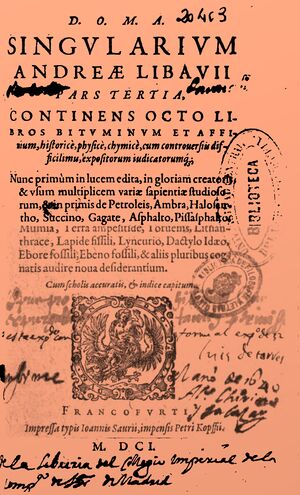 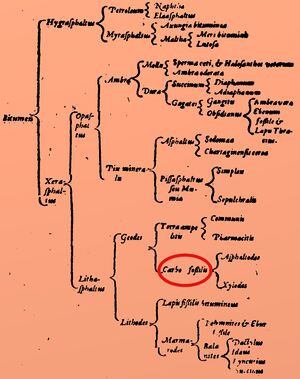 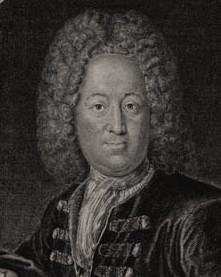 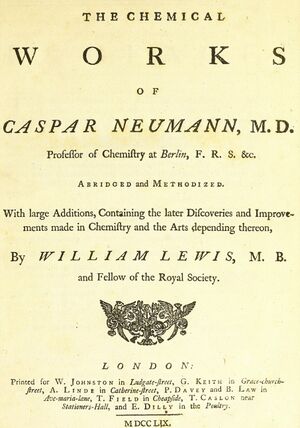 Fig. 8 Frontispiece of The Chemical Works of Caspar Neumann, 1759. 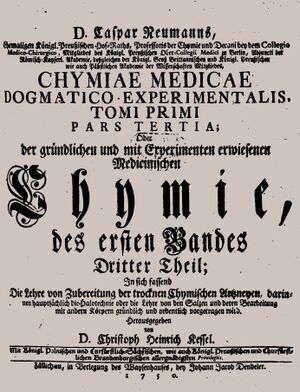 Fig. Detail of the Index where Williams mentions fossil fuel in reference to the process of iron smelting. 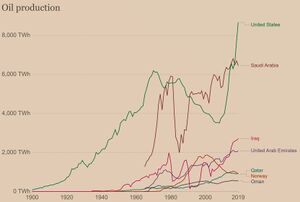 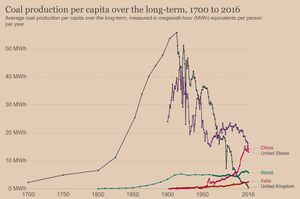 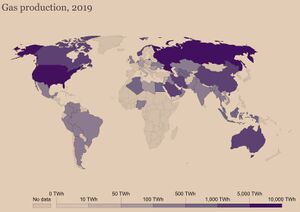 Fossil fuels are energy resources derived from altered remains of living organisms buried by sediments and exposed to elevated pressures and temperatures for millions of years. They are defined non-renewable because of the long time it takes to create them.

There are three basic forms of fossil fuels: petroleum (or, crude) natural gas, and coal (subdivided in different ranks).[1] Fossil fuels store energy in the bonds between the atoms that make up their molecules. Burning the fuels breaks apart those bonds, and this releases the energy that originally came from the sun. These natural resources are widely, not uniformly, distributed in the planet subsoil (Fig. 1, 2, and 3).

In a common perception, the expression fossil fuels refers to matter produced (for mineralization)[2] from the biomass of plants and animals accumulated from lifeforms from millions of years ago, buried into the ground for eons.[3] But, what we call fossils have nothing to do with the fuels mentioned above.

The theory that fossil fuels were formed from the petrified remains of dead plants through heat and pressure in the earth's crust over millions of years was first introduced by Andreas Libavius[4] (he supposed from the resins of ancient trees) in his work​​ Alchymia published in 1597 (FIG. 4). Four years later, in 1601, he elaborated the concept in the third tome of the Singularium (Fig. 5), where he also proposed the most detailed chart on Bitumen (the genus including all the known forms of burning liquids and earth coming from the ground) that had published at the time in a scientific treatise (Fig. 6). Libavius was in contrast with those natural philosophers who theorized petroleum and coal having origin after chemical reactions and actions of endogenous forces below the crust (e.g. George Agricola)- in this historical moment begun the biogenic-abiogenic debate[5] on the origin of petroleum.

The first utilization of the term fossil fuels in relation to coal and petroleum can be tentatively framed between 1710s and 1750s, following the work of the Prussian chemist and pharmacist Caspar Neumann (1683-1737)[6] and the British physician and chemist William Lewis (1708-1781) (Fig. 7). Neumann in 1711 was Royal Court Apothecary under Friedrich I, King of Prussia, who sent him to visit European universities and scholars for research. In 1713 when he was in London, the king died and his successor, King Friedrich Wilhelm I, removed him from the royal appointment. Neumann continued his work in the British capital (he was hired as chemist at the service of the famous surgeon and chemist enthusiast Abraham Cyprianus) and got acquainted with the circle of the Royal Society of London. Neumann distinguished himself in the national scientific community, but he still wrote books and articles in the German language. In early 1719, back again in his Berlin, Neuman was offered the old appointment (held until his death in 1737), and so closed his parenthesis in the United Kingdom.

Eventually, he completed the work in German between Berlin and London, passing through other European countries, resulted in a summary of his lessons on chemistry containing extensive chemical knowledge of the time with a critical examination of phenomena and facts - was brought to the attention of anglophone readership when it was organized, revised, translated and published in English in 1759’s The Chemical Works of Caspar Neumann, M.D. Professor of Chemistry in Berlin, FRS etc., abridged and methodized: with large additions, containing later discoveries and improvements made in chemistry and the arts depending thereon (Fig. 8). Following, editions in Dutch and French were also printed. The treatise is an abridgement of the Neumann's Chymiae medicae dogmatico-experimentalis (7 tomes, published posthumous between 1749-1756) (Fig. 9) realized by William Lewis, Fellow of the Royal Society, and Copley Medal[7] awardee for his work on platina in 1754.

In the Lewis translation, the expression fossil fuels resides in two sections. In the first, fossil adjectives both wood and coal: since Lewis often used in the same paragraph the terms pit coal and its equivalent mineral coal, at some point in the narration probably he wrote fossil coal to avoid redundancy.

The second reference appears in the subject index under the heading “Iron, its ores”: one of the sub-heading reports “(iron) fused with fossil fuels” (Fig. 10). Some scholars recently proposed that this is the first neat utilization of the expression fossil fuels and it should be referred both to coal, petroleum, and natural gas. But, no clear evidence supports that and it must also be observed that under the entry bitumen, which includes naphtha, petroleum, pitch, and tar Neumann/Lewis do not write directly about their their origins, and no mention to fossil is made.

In the 17th century, the adjective “fossil” derived from the Latin fossilia, meaning preserved by digging, found buried in the earth. Only in the 18th century the English noun fossil gradually started to refer to the modern and in use today long-dead organisms.

Whether it was Neumann in the early 18th century, or Lewis some 40 years later, the writer believes the term fossil fuels reported in 1859’s book has to be accepted in the 17th century meaning. The expression fossil fuels appear, matures and gradually establishes between the 17th and 18th centuries through a process of overlapping of meanings in a time frame of semantic transition for the early geology and paleontology terminology. The rapid development of petroleum science since the 1850s generated the need for a uniform and acknowledged terminology. Fossil fuels was commonly in use for coal and thick bitumen; the subsequent diffusion of new organic origin theories for petroleum - for example, the Canadian Thomas Sterry Hunt concluded in 1863 after a decade of studies that some petroleum of Ontario was derived from marine animal and vegetation deposited in Paleozoic rocks and transformed by a similar process occurred in coal formation - persuaded scientists to include petroleum in the family of the fossil fuels.

This definition did not reflect the theses of the proponents of the theory on the inorganic origin of petroleum. Anyway, it will be eventually accepted also by this minor scientific wing since it was rooted in the universal scientific language; and, in some extent it could always be interpreted, in a subjective way, in the classical 17th century meaning.

When the fossil evidence emerged during the 18th century, coals origin was ultimately linked to plant remains and, almost at the same time, many scientists sustained a similar theory to describe petroleum and natural gas origin. The terminology shifted “improperly” through the centuries, but it stands the concept that fossil fuels are not fossil.

Liquid hydrocarbon composed mainly of hydrogen and carbon. Depending on its composition, it is present in nature in different colors, texture and viscosities.[8] The majority of the known petroleum deposited during the Mesozoic Period:[9] plankton, algae, and other organic matter sank to the floor of past seas and oceans seas and got buried by debris precipitated down through the waters. Microbes dined on the dead matter and chemical reactions further transformed these buried materials. As debris buries it deeper and deeper, the chemical becomes ever hotter and subjected to more pressure. Eventually, two substances formed: waxy kerogen[10] and a black tar called bitumen.[11] If conditions become just right, the kerogen transforms into the hydrocarbons known as crude oil (Fig.11).

Usually found deposited in sedimentary rocks where rock and dead plant and animal matter piled up in layers during geological eras. Coal began to form during the Carboniferous period[12] about 300 to 360 million years ago, when algae and debris from vegetation in swamp forests deposited below layers of mud. Coal can be made of black or brown chunks of sedimentary rock that range from crumbly to relatively hard texture. It is classified into four categories:[13] anthracite, bituminous, sub-bituminous, and lignite depending on its carbon content (Fig. ).

Natural gas[14] is stored both in pockets above petroleum deposits and by itself into sedimentary rock layers. The term natural gas has come to have a technical meaning, referring only to those gases occurring in rocks which are sufficiently inflammable to be used as a fuel - volcanic gases, or the gases of the atmosphere, are also natural but are not included in the common use of the term.

Natural gas is an inflammable mixture of the very lightest hydrocarbons produced from kerogen exposed to very high pressure and temperature. Colorless and almost odourless, it chiefly consists of methane, but after refining other individual hydrocarbons are isolated and utilized as source of energy: ethane, propane, and butane.

Ethane is often used to get ethylene and polyethylene, which are the base feedstocks for the production of packaging, wires, insulation, and many other plastic-like products.

Propane is processed in gas or liquid form. Due to its high-energy output it is chiefly used for fueling engines, cooking with stoves and for central heating, furnaces, and water heaters.

Butane is not as abundant as other hydrocarbons and it makes about 20% of natural gas. It is a viable source of energy used as component in gas to fuel vehicles, and lighters (Fig. 13).

Crab, George. 1833. Universal technological dictionary: or familiar explanation of the terms used in all arts and sciences, containing definitions drawn from the original writers. London: Printed for Baldwin and Cradock.

Kraft, Alexander. 2009. “On Two Letters from Caspar Neumann to John Woodward Revealing the Secret Method for Preparation of Prussian Blue”. Bulletin on the Hist of Chemistry 34, no. 2.

Morello, Nicoletta. 2003. “The question on the nature of fossils in the 16th and 17th centuries”. In Gian Battista Vai et William Cavazza, eds, Four Centuries of the Word Geology. University of Bologna, Alma Mater Studiorum, 127-151.

Rudwick, M. J. S. 2005. Bursting the limits of time: the reconstruction of geohistory in the age of revolution. Chicago: University of Chicago Press.

Retrieved from "https://ethw.org/w/index.php?title=Fossil_fuels&oldid=186939"
Categories:
This page was last edited on 10 December 2021, at 17:14.
About ETHW
Policies and disclaimers