Integrated Circuits and the Space Program and Missile Defense 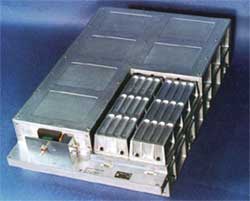 The first computer to use integrated circuits was the Block I, a model of which is shown here. Courtesy: Smithsonian Institution.

Integrated circuits (ICs) helped create the computer industry by providing users with more speed and functionality. But the relationship between computer users and computer manufacturers is symbiotic: the needs and demands of customers also spur the acceleration of new IC designs. Engineers often turn to IC designers seeking a new product that can help them achieve the goals of their own programs. Two examples of this are the U.S space program and the U.S Minuteman missile system.

The first spacecraft of the Mercury series, which were launched in the late 1950s, had no computers on them at all. By the mid-1960s, burgeoning computer technology was advanced enough to equip Mercury with its own on-board digital computer, which was used for navigation purposes. By the early 1960s, with the “Space Race” in full swing, scientists, engineers, and politicians set their sites on the moon. The planning of the Apollo missions, as they were known, coincided with the appearance of the IC.

An early launch of a Minuteman Missile. Courtesy: Boeing

As they went to work designing the first Apollo computer, engineers saw the IC as a way to reduce the size and weight of an on-board computer. The task of designing the computer was given to engineers at the Massachusetts Institute of Technology. In 1962, engineers decided to substitute ICs for individual transistors. To suit the special needs of the mission, MIT specified its own IC “logic gate” with three transistors and four resistors. About 5000 of these chips were needed to construct the flight computer. This advancement shook up the IC industry because, at the time, MIT purchased as much as 30% of the total world output of ICs for this single project. Two IC-based computers were designed, the Block I for the unmanned test missions, and the improved Block II for the manned launches. By the time of the 1969 moon mission the Block II was already obsolete because of rapid advances in IC technology. However, the project remained important because it was the first time that an IC computer had gone into space, and because it had given the integrated circuit industry a boost at an important stage in its development. The space program’s demand for improved ICs had another consequence: the high demand for ICs drove down the price. Early ICs were much more expensive than circuits made from individual transistors, with the first chips costing about $1000 each in 1960. By 1963, demand created by the Apollo program had driven the price down to about $25. This helped other industries find applications for ICs, and use of the technology spread.

While the relationship between rocket technology and ICs would remain strong, another key project that created demand for ICs and therefore spurred the widespread use of chips was the United State’s Minuteman missile program. The Minuteman missile program began in the early 1960s as part of the Cold War nuclear arms build-up. A Minuteman missile is an intercontinental ballistic missile or ICBM, which means it is shot into outer space and then falls to earth. Minuteman missiles could be guided to their targets from earth stations or aircraft, but engineers wanted a design that would have an on-board navigational computer. To do so, they turned to the new technology of ICs. Because hundreds of missiles would be made, each using thousands of chips, the program’s demand for ICs was high. Like the demands made by NASA, this meant that certain chips would have to be mass-produced. Engineers met this need and by 1964 Texas Instruments successfully tested a navigational computer based on a set of ICs. While not the only uses for ICs in these years, the guaranteed market and premium prices paid by the NASA and military in the early days of the IC were decisive factors in ensuring the success of this new technology, and led toward mass-produced, low-cost chips for personal computers and other systems.

Retrieved from "https://ethw.org/w/index.php?title=Integrated_Circuits_and_the_Space_Program_and_Missile_Defense&oldid=154630"
Categories:
This page was last edited on 12 April 2017, at 13:51.
About ETHW
Policies and disclaimers