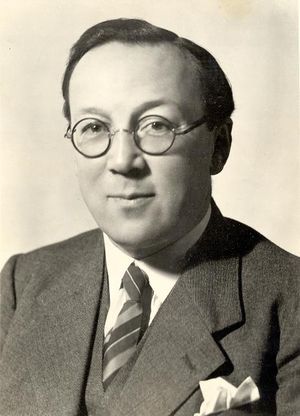 Sir Robert Watson-Watt was the first scientist to apply the concept of radar to a military system, developing a series of air and sea radar installations and technologies before World War II that proved central to the British war effort.

Watson-Watts was born in Aberdeenshire in 1892 and studied electrical engineering at the University College in Dundee. He became an assistant to the professor of physics and studied wireless telegraphy.

During the First World War, Watson-Watt hoped to apply his knowledge of wireless to bolstering English air defenses, but the technology remained in its infancy. The only ways to detect enemy aircraft was by eye and ear, and even searchlights did not help: despite their size, German zeppelin blimps could attack at night without interference. During and after the war, Watson-Watt worked at a meteorological station which used radio to locate thunderstorms. In 1927, this station merged with another to form the Radio Research Station. Watson-Watts and his colleagues used cathode-ray tubes to monitor the atmosphere and measure its height. In doing so, Watson-Watt coined the term “ionosphere.”

During the interwar years, concern over air defense remained a pressing issue. The British attempted to use microphones and sound reflectors as a warning system. Putting his background in radio to use, Watson-Watts assembled a Committee for the Scientific Study of Air Defence in 1935 to develop advanced detection technologies.

Swiftly rejecting a proposal to use radiation—a “death ray”—to stop enemy aircraft, Watson-Watts suggested the potential for using radio waves as a detection system. He submitted a draft memorandum on February 12, 1935, estimating the optimum wavelength for such a radio signal and predicting that the use of short pulses could measure the range of the target. He advised that researchers use cathode-ray tubes as direction finders for measuring bearing and elevation.

Within months, government researchers created a prototype for Watson-Watt’s direction-finder and put it to a successful test at Orfordness. They were soon able to detect the range of aircraft, and by the end of the year, they managed to locate its position in three dimensions. By the end of 1935, the British Treasury approved a plan to construct five radar stations around London. In August 1936, Watson-Watt was named the superintendent of Bawdsey Research Station, which was solely dedicated to radar research. Although initial tests of the system were rocky, it became a crucial part of the British defense infrastructure by the late 1930s.

Watson-Watt was not the first to experiment with using radio waves to detect distant metal objects—German scientist Christian Hulsmeyer did so in 1904, and American researchers were conducting similar work at the same time as their British counterparts—but he was the first to put them to work during a time of crisis. Radar proved invaluable to British endurance during World War II, from the Battle of Britain, to the defenses against night air raids that followed, to the submarine warfare of 1941 to 1942, and ultimately to Allied bombing runs over Germany.

After the war, Watson-Watt worked in various public and private capacities for the British government. In the 1950s, he moved to Canada and later the United States. He died in 1973.

Retrieved from "https://ethw.org/w/index.php?title=Robert_Watson-Watt&oldid=147041"
Categories:
This page was last edited on 25 February 2016, at 18:01.
About ETHW
Policies and disclaimers