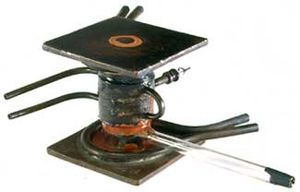 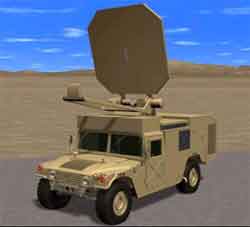 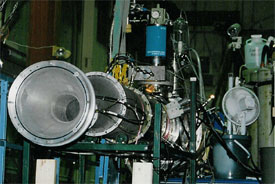 Every time you warm something in a oven, you use a device that helped change the course of history during World War II: the cavity magnetron tube. Because it can produce large amounts of power very efficiently, the cavity magnetron helped scientists and engineers in Great Britain, the U.S, and other countries to build compact, efficient radar sets that could spot enemy planes, ships, and even submarine periscopes miles away in the dark. When thousands of these sets were installed on land, at sea, and in aircraft, they made a critical difference in many battles throughout the war. The cavity magnetron was invented in England under wartime pressures. When Germany attacked Poland in September 1939, English scientists had already installed a coastal radar system called Chain Home to detect incoming flights of German bombers. Although the system worked fairly well, it used long radio waves that required antennas 110 meters (360 feet) high. In order to make radar sets small enough to fit on ships or , engineers needed to use much shorter wavelengths, like those in the region. But in 1939, no one knew how to produce the high-power microwaves needed to build radars that could “see” over a distance of many miles.

Under the direction of Australian physicist Mark Oliphant, two engineers at the University of Birmingham named Harry Boot and John Randall combined a number of ideas from researchers in the U.S, Denmark, France, and Japan. A type of electron tube called a “magnetron” had been invented almost twenty years earlier by U.S researcher A. W. Hull. Hull’s tube had a hot filament wire that emitted and a cylindrical plate around the filament that collected them. Normally, in a vacuum tube go in straight lines from the filament to the plate. But Hull put a magnetic field on the tube, and this field made the go in curved paths. Hull could control the amount of current reaching the plate by varying the magnetic field strength, but he found few practical uses for his . By 1939, other researchers had discovered that under certain conditions, the magnetron could produce very high- radio waves. Boot and Randall decided to construct a magnetron that could handle a lot of power and generate microwaves efficiently. Most at that time used glass envelopes to enclose the evacuated space inside of the device. Instead of glass, Boot and Randall made their magnetron tube enclosure out of a solid block of copper, which conducts heat very well. In order to tune the tube’s output wavelength efficiently, they drilled special holes called “cavities” into the block. Just as the length of an organ pipe tunes the pipe to a certain pitch, the size of a magnetron’s cavities can efficiently tune microwaves to a certain wavelength. Then Boot and Randall put the entire tube into a strong magnetic field that swept past the cavities in a rotary motion.

On 21 February of 1940, the English researchers tested their first working cavity magnetron. They were amazed to find that it produced over 400 watts of power at the extremely short wavelength of 9.8 cm (about 4 inches). This was nearly a hundred times more power than anyone else had ever produced at that wavelength. By May, other researchers were using the cavity magnetron in a radar set that could detect a submarine periscope six miles away. In September of 1940, a British delegation under Sir Henry Tizard carried a cavity magnetron secretly across the Atlantic and persuaded the U.S to begin large-scale development and of the device. Many historians believe that the advantage the magnetron gave to U.S allies in World War II made a significant difference in many phases of the war. Since World War II, most of the important types of magnetrons that are used to generate microwave power (including those in microwave ovens) are cavity magnetrons.

Retrieved from "https://ethw.org/w/index.php?title=Cavity_Magnetron&oldid=159988"
Categories:
This page was last edited on 2 July 2018, at 16:04.
About ETHW
Policies and disclaimers