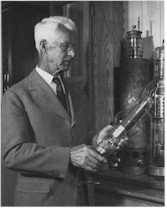 Albert W. Hull was born on a farm in Southington, Connecticut on 19 April 1880 and graduated from Yale University, where he majored in Greek and took one undergraduate course in physics. He taught languages at Albany Academy for a time before deciding to return to Yale, where he earned a Ph.D. in physics. He then taught physics for five years at the Worcester Polytechnic Institute while doing research on photoelectricity. He joined the staff of the General Electric Research Laboratory (GERL) in Schenectady, New York in 1914, remaining there until his retirement in 1949.

During 1916, Hull began experiments on the use of magnetic control of vacuum tubes as an alternative to grid or electrostatic control. In the 1918 issue of the Proceedings of the IRE he published a paper on a vacuum tube which he had invented called the dynatron. The dynatron had three electrodes: a thermionic cathode, a perforated anode, and a supplementary anode or plate. In normal operation the plate was maintained at a lower positive potential than the perforated anode. Hull explained that secondary emission of electrons from the plate caused the dynatron to behave as a "true negative resistance." Thus the tube could be used as an amplifier or could generate oscillations over a wide range of frequencies. If a control grid were added between the cathode and the perforated anode, the device became what Hull called a "pliodynatron." In addition to grid control, he had tested successfully magnetic control by applying a magnetic field parallel to the axis of the tube. Initially, Hull's work on these novel electron tubes was part of an effort at General Electric to develop amplifiers and oscillators that might be used to circumvent the vacuum-tube triode patents of Lee de Forest and Edwin Armstrong.

By 1920 this research led to his invention of the magnetron, which took the form of a coaxial cylindrical anode and cathode with an axial magnetic field produced by an external coil. The Hull magnetron was tested as an amplifier in radio receivers and also as a low-frequency oscillator. It was reported in 1925 that a magnetron made at GERL could generate a power of 15 kW at a frequency of 20 kHz. At the time Hull anticipated that the magnetron would find greater use as a power converter than in communication applications.

Hull also was a key participant in the development of gas-filled electron tubes at the GERL during the 1920s. In 1927 he discovered how to protect thermionic cathodes from rapid disintegration under ion bombardment. This enabled the successful development of a variety of hot-cathode thyratrons (gaseous triodes) and phanotrons (gaseous diodes). These devices were employed in such applications as synchronous torque amplifiers, thyratron motors, control of guns and machine tools, and direct- current power transmission.

Hull became assistant director of the GERL in 1928 and was known for his collegial management style with minimal interference with the research agenda of his staff members. The IRE awarded him the Morris N. Liebmann Prize in 1930 and the IRE Medal of Honor in 1958 "For outstanding scientific achievement and pioneering inventions and development in the field of electron tubes."

He was elected a member of the National Academy of Sciences and served as president of the American Physical Society in 1942. He did consulting work and served on an advisory committee of the Army Ballistics Research Laboratories after retirement from General Electric. He died on 22 January 1966 at the age of 85.