Women and Electrical and Electronics Manufacturing 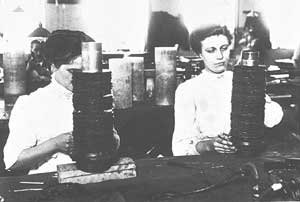 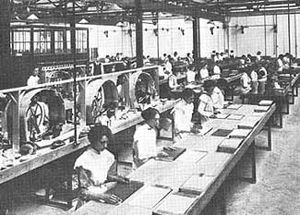 While it is true that men made many of the key inventions in electrical devices and electronics, women played a role that was equally important—it was women more than men who assembled these technologies in factories. The prominence of women in electrical and electronics manufacturing was because of reasons, which, from today’s perspective, appear to be unjust. Because of sex discrimination, women could be hired as factory workers for lower wages than men. Hiring women instead of men for assembly jobs meant more profits for the company. The irony, however, is that they were often as well-educated and as highly skilled as their male counterparts.

From the consumer’s perspective, this was not exploitation but progress. Partly because their wages were so low, women made it possible for corporations to mass produce electrical and electronics devices and sell them at low cost. This enabled ordinary consumers to bring radios, televisions, appliances, and other technologies into their homes and lives. If it had not been possible to manufacture these items in vast quantities at ever-lower prices, it is unlikely that we would have them today. So there was both good and bad in this system.

It is also important to see things from the perspective of the times. In the early 20th century, many women workers saw employment in the electrical industries as highly desirable. To them, it was much better than most of the other jobs open to women, such as sewing in “sweatshop” apparel factories or working in other industries (which often involved dirtier or more strenuous work). Women in the electrical and electronics industries were also well represented by labor unions, which helped make working conditions better. The issue of who benefited from the advent of new technology is always complex, and always depends on one’s perspective.

Women had entered the electrical manufacturing industries at the beginning on the 20th century, making light bulbs and electric motors. World War I accelerated the process of mechanization in the electrical industry, where machines and unskilled laborers were substituted for skilled craftwork. Mechanization made it attractive to employers to hire the lowest-wage workers they could find, and in the United States that usually meant women (minorities such as African-Americans might have been hired, but the extreme discrimination at the time meant that employers usually would not hire them at all). There were factory jobs reserved for men, but during World Wars I and II, when men were called to battle, women temporarily held these jobs.

A survey of women in electrical manufacturing during World War I (1914-1918) showed that women were doing tasks such as stamping mica insulators for electric motors, winding coils for motors and transformers, and assembling and connecting motors. According to one observer, “little skill was required for much of the work, but the ability to follow written specifications was essential.” Literacy, of course is a skill, although like many skills that women possessed, it was rarely appreciated at the time. Though they were paid little, women were typically well-educated and technically proficient, making them ideal for these jobs.

The coming of radio continued the trend of greater numbers of women workers. In 1920, although radio was still a new technology, women were already employed making electron (vacuum) tubes and testing radio units. By the late 1920s, there were 6,000 women but only 400 men employed by U.S. factories making tubes, radio receivers, speakers, capacitors, and transmitters. World War II (1939-1945) pushed even more women into factories, especially in the rapidly expanding electronics industries. From a total of about 100,000 women who were employed in electrical industries in the late 1930s, the figure during World War II grew to 397,000. By 1945, when the war ended, fully 1/2 of all workers in electron tube manufacturing were women. The trend continued after the war as well. A survey taken in 1953, just about five years after television set production resumed after World War II, showed that nearly all workers on television assembly lines were women. These women sat on each side of a 300-foot long table using hand tools to do repetitive tasks such as wiring, soldering, lacing the wiring in TV sets, inserting parts in sequence, inserting tubes, and final testing.

The electronics industry was the largest employer of women in the United States by 1960. In the United States, the assembly of consumer electronics devices declined after 1960, and many of these jobs were transferred to Latin America and Asia, where labor was even less expensive. Today, many women around the world are employed assembling televisions, cellular telephones, computers, and other electrical devices.

Sprague Electric: An Electronic Giant's Rise, Fall, and Life after Death -- a history of a capacitor manufacturing company, with some detail on women's roles in manufacturing capacitors, condensers and other components.

Retrieved from "https://ethw.org/w/index.php?title=Women_and_Electrical_and_Electronics_Manufacturing&oldid=154755"
Categories:
This page was last edited on 12 April 2017, at 13:52.
About ETHW
Policies and disclaimers