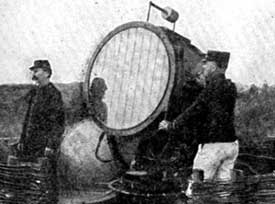 This searchlight, which was used in the defense of Paris, was just one of many new electrical technologies applied to warfare during World War I.

It's a long way off from today's fighter jets, but biplanes like this German one from World War I marked the beginning of aerial warfare. Courtesy: Dr. F.X. O'Connor Fonds, Queen's University. 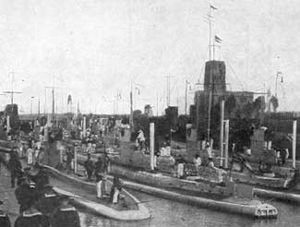 World War I was one of the defining events of the 20th century. From 1914 to 1918 conflict raged in much of the world and involved most of Europe, the United States, and much of the Middle East. In terms of technological history, World War I is significant because it marked the debut of many new types of weapons and was the first major war to “benefit” from technological advances in radio, electrical power, and other technologies.

World War I grew out of a variety of factors that had been building up throughout Europe in the preceding decades. During the later 1800s many European countries experienced a rise in nationalism. Nationalism, combined with growing industrial capabilities, led to military buildups and an increasingly tense political situation throughout the continent. Nations were increasingly nervous about what their neighbors might be planning. In response to this tension, England, France, and Russia (Italy would join in 1915 after the war was underway) formed the “Triple Entente” and aligned against Germany and Austria-Hungary. This was one of numerous alliances that divided Europe and made world war virtually impossible to avoid if one nation took action against another.

The flashpoint of the war is generally regarded as the 1914 assassination of Archduke Franz Ferdinand, heir to the throne of Austria-Hungary, during a state visit to Sarajevo. Austria-Hungry turned its anger towards Serbia, who, they believed, encouraged and abetted the assassination. In retaliation, Austria-Hungary invaded Serbia. On 29 July, in defense of Serbia, Tsar Nicholas II mobilized Russia’s armed forces to pressure Austria-Hungary. Three days later, on 1 August, Kaiser Wilhelm II of Germany honored its alliance with Austria-Hungary, and declared war on Russia. That same day, France, following its alliance with Russia, mobilized. Two days later, on 3 August, Germany declared war on France. Great Britain, as an ally of France, declared war on Germany on 4 August. Less then a month and a half after the assassination of the Archduke and within a week of the first military mobilizations the peoples of Europe were engulfed in war.

From the onset, those involved in the war were aware that technology would make a critical impact on the outcome. In 1915 British Admiral Jacky Fisher wrote, “The war is going to be won by inventions.” New weapons, such as tanks, the zeppelin, poison gas, the airplane, the submarine, and the machine gun, increased casualties, and brought the war to civilian populations. The Germans shelled Paris with long-range (60 miles or 100 kilometers) guns; London was bombed from the air for the first time by zeppelins.

World War I was also the first major war that was able to draw upon electrical technologies that had been in development at the turn of the century. Radio, for example, became essential for communications. The most important advance in radio was the transmission of voice rather than code, something the electron tube, as oscillator and amplifier, made possible. Electricity also made a huge impact on the war. Battleships, for example, might have electric signaling lamps, an electric helm indicator, electric fire alarms, remote control—from the bridge—of bulkhead doors, electrically controlled whistles, and remote reading of water level in the boilers. Electric power turned guns and turrets and raised ammunition from the magazines up to the guns. Searchlights—both incandescent and carbon-arc—became vital for nighttime navigation, for long-range daytime signaling, and for illuminating enemy ships in night engagements.

Submarines also became potent weapons. Although they had been around for years, it was during WWI that they began fulfilling their potential as a major threat. Unrestricted submarine warfare, in which German submarines torpedoed ships without warning—even civilian ships belonging to non-combatant nations such as the United States—resulted in the sinking of the Lusitania on 7 May 1915, killing 1,195 people. Finding ways to outfit ships to detect submarines became a major goal for the allies. Researchers determined that allied ships and submarines could be outfitted with sensitive microphones that could detect engine noise from enemy submarines. These underwater microphones played an important part in combatting the submarine threat. The Allies also developed sonar, but it came too close to the end of the war to offer much help.

The war, especially the brutality of trench warfare, brought death and disease on a scale people had never before experienced. During the 10-month-long Battle of Verdun in 1916, for example, as many as 1,000,000 people were killed. As the war dragged on, casualties increased, and the war became unpopular with ordinary people. Revolution in 1917 led to the end of Russian participation in the war and precipitated the Bolshevik regime. Just over a year later, a worker’s revolution in Germany forced the abdication of Kaiser Wilhelm II on 9 November 1918. With the militaristic Kaiser out of the way, Germany requested an armistice. Two days later, it took effect on the “Eleventh hour of the eleventh day of the eleventh month.” On 28 June 1919 German delegates signed the Treaty of Versailles and the war was officially over.

Although the war was over, its ramifications were far reaching. Technologically, great strides had been made in just about every area that might come into play during war. But the costs had been dear, and the end only temporary. Deaths from “The Great War” have been estimated at 10,000,000, and the end of the war itself, the Treaty of Versailles and its humiliating terms for Germany, laid the groundwork for World War II. The war was called “the war to end all wars,” and at the time that seemed possible. Unfortunately, it would prove untrue in less then a generation.

Retrieved from "https://ethw.org/w/index.php?title=World_War_I_Technology&oldid=148114"
Categories:
This page was last edited on 31 March 2016, at 16:06.
About ETHW
Policies and disclaimers