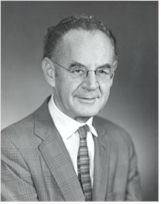 A native of New York, Albert Rose was born on 30 March 1910. He joined RCA after receiving an A.B. degree and a Ph.D. degree in Physics from Cornell University in 1931 and 1935, respectively.

Rose's initial research efforts produced the Orthicon in 1937, the camera tube used in RCA's introduction of television at the New York World's Fair in 1939. In 1942 when RCA Laboratories was established, Rose transferred to Princeton from Harrison, N.J., bringing with him a completed model of what later became the Image Orthicon. At RCA Laboratories he was joined by P.K. Weimer and H.B. Law, who had developed what was essentially an electrostatic counterpart of Rose's tube. The three combined their efforts to perfect a new pickup tube with increased sensitivity, greater contrast, improved picture quality, and decreased size and weight. The Image Orthicon was turned over to the War and Navy Departments in 1943 for use in guided missiles. For the first quarter century of television, it was the principal camera tube for television broadcasts throughout the world.

In 1942 Rose became interested in the relative limitations in the light sensitivity of photographic film, television pickup tubes, and the human eye. This work resulted in development of a theory of visual sensitivity and, ultimately, in the publication in 1973 of his book, Vision: Human and Electronic. His studies in the field of solids led to his monograph, Concepts in Photoconductivity and Allied Problems, published in 1963.

From 1955 to 1957, Rose headed the research activity of the then newly established Laboratories RCA Ltd., Zurich, Switzerland. On his return to RCA Laboratories in Princeton, he resumed research relating to the study and application of photoelectric phenomena, and in 1959 he was named a Fellow of the Technical Staff. He retired from RCA in 1975 but continued involvement in his field as a visiting professor and consultant.

Rose was granted about 40 U.S. patents and published more than 50 technical papers and articles. His 40-year career with RCA, which resulted in important discoveries and applications in photoconductivity and photosensitivity, included basic contributions to the Orthicon, Image Orthicon, and Vidicon TV camera tubes. He received many awards including the Television Broadcasters Association Award, the Morris N. Liebmann Award of the Institute of Radio Engineers, and the Journal Award of the Society of Motion Picture Engineers. In 1958 he was one of two recipients of the first RCA David Sarnoff Outstanding Achievement Award in Science and Engineering "for basic contributions to the understanding and utilization of photoelectric phenomena." In 1958 he received the David Sarnoff Gold Medal Award of the Society of Motion Picture and Television Engineers for basic contributions to TV pickup tubes. He was awarded the IEEE Edison Medal in 1979 "For basic inventions in television camera tubes and fundamental contributions to the understanding of photoconductivity, insulators, and human and electronic vision."

A Fellow of the American Physical Society and the Institute of Electrical and Electronics Engineers, Rose was a member of Phi Beta Kappa and the Societe Suisse de Physique. He was a member of the National Academy of Engineering. He served on the organizing committees for many International Conferences and lectured extensively on his fields of interest in the U.S. and abroad. He served as Associate Editor and Editorial Advisor of major scientific journals.

Retrieved from "https://ethw.org/w/index.php?title=Albert_Rose&oldid=173950"
Categories:
This page was last edited on 19 February 2019, at 16:50.
About ETHW
Policies and disclaimers