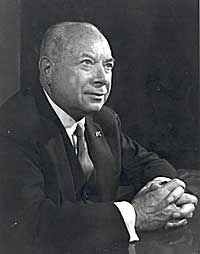 Sarnoff, the eldest of five children, was born on 27 February 1891 outside Minsk in imperial Russia. He and his family immigrated to the United States in 1900 and settled on the Lower East Side of Manhattan. Sarnoff’s first job was as a newsboy; the existence of so much cheap information--through newspapers, magazines, telegraphs, libraries, newsreels, etc.--helped explain American dynamism compared to Russia. At fifteen, his grade schooling finished, to support his family he found a job as a messenger boy for the Commercial Cable Company. When his boss refused him time off for Rosh Hashanah, he joined the Marconi Wireless Telegraph Company of America as an office boy and then a telegrapher.

After taking an electrical engineering course at Pratt Institute, Sarnoff concluded that the path to leading its continuing innovation technically was not by being an engineer. Driven to influence if not direct the wireless communications industry, by 1912 he was managing the new Marconi station atop Wanamaker’s department store in Manhattan, New York City. After the sinking of Titanic, Sarnoff stayed on duty for 72 hours, gathering names of survivors for anxious relatives with two other wireless telegraphers. Sarnoff took and learned everything he could about the business, the technology, and the customers, and more promotions followed.

Sarnoff was not satisfied with home radio's success. He advocated the application of radio electronics to the phonograph industry, portable radios, facsimile, network broadcasting (NBC), and sound films for the movie industry. In addition, from 1929 to 1939, as RCA's president during the Great Depression, he convinced RCA's board of directors to allocate $10 million to develop an electronic television system despite the company's losses. This was based largely on the work of Vladimir Zworykin, who invented a practical electronic camera tube. Investing in this system meant neglecting the innovation of Edwin Howard Armstrong's frequency modulated (FM) radio system because NBC's own and affiliated stations could not afford to buy and develop both simultaneously. When other industries and corporations opposed RCA’s approach, he and the corporation fought them vigorously. Independent TV inventor Philo T. Farnsworth was one of the few who stood up to Sarnoff and RCA and won, before joining with RCA to advocate commercial TV in 1940-41.

During World War II, Sarnoff served as a U.S. Army officer after bigotry kept him from serving in the U.S. Navy during World War I. He served on General Dwight Eisenhower’s staff, helping coordinate allied news communications for the invasion of Europe, and was promoted to brigadier general. For the rest of his life, he would be addressed as “General Sarnoff.” After the war, Sarnoff championed electronic color television in an eight-year battle with rival company CBS, which advocated an electromechanical system. His support of innovation at the RCA Laboratories--renamed the David Sarnoff Research Center--in Princeton, New Jersey, led to the establishment of the U.S. color TV standard in 1953 that served as the fundamental approach of monochrome-compatible color TV systems around the world.

Sarnoff continued to support innovation in communications technologies, including flat-panel displays, weather and communications satellites, and low-power solid-state electronics with a vision of enabling people around the world to communicate with each other by "voice, sight, or written message" on handheld devices. Although he knew he would not see their commercialization, Sarnoff attended the dress rehearsal for RCA's introduction of the liquid crystal display (LCD) in 1968. By then he suffered from a mastoid infection that left him deaf, dumb, and blind, communicating only by tapping Morse code into an associate's hand. On 12 December 1971, Sarnoff passed away and is buried at Kensico Cemetery in Valhalla, New York.

Retrieved from "https://ethw.org/w/index.php?title=David_Sarnoff&oldid=184107"
Categories:
This page was last edited on 9 February 2021, at 19:01.
About ETHW
Policies and disclaimers