On 1 April 1960, the National Aeronautical and Space Administration launched TIROS I, the world's first meteorological satellite, to capture and transmit video images of the Earth's weather patterns. RCA staff at Defense Electronics Products, the David Sarnoff Research Center, and Astro-Electronics Division designed and constructed the satellite and ground station systems. TIROS I pioneered meteorological and environmental satellite television for an expanding array of purposes.

The plaque can be viewed at: SRI International (at entrance), 201 Washington Road, Princeton, NJ, 08540 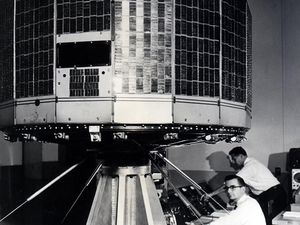 TIROS I was the world's first meteorological satellite, launched with the primary objective of demonstrating the feasibility of utilizing television cameras to observe the earth's cloud cover from a satellite. Because of the success of TIROS I, NASA and the U.S. government continued and expanded the use of satellite video technology into environmental and other applications as a vital part of the world's peaceful use of outer space. To create a worldwide weather satellite system that provided meteorologists with a continuous supply of accurate weather information, RCA Astro-Electronics contracted for the polar orbit series of TOS (Tiros Operational Satellite), which was administered by the U.S. Environmental Science Services Administration (ESSA). For the second decade, NASA continued the TIROS program in 1970 under the administration of the newly created National Oceanographic and Atmospheric Administration (NOAA). Astro then contracted to build the more efficient TIROS-M satellite with cameras and infra-red radiometers mounted on an earth-oriented platform, and supplied the follow-on ITOS (Improved Tiros Operational Satellite). The 1970s closed with TIROS-N precision pointing platform satellites patterned from Astro's latest USAF satellite from the DMSP (Defense Military Satellite Program) whose design configuration and concepts continued to be employed in NOAA polar orbiting weather satellites. These satellites and their successors employed line-scan radiometers in lieu of TV cameras. Lockheed Martin, the latest corporate successor to RCA Astro-Electronics, launched TIROS N-19 on February 6, 2009. The satellites' imaging capabilities have extended well beyond weather observation to include climate research, sea surface temperature measurements, volcano monitoring, forest fire detection, vegetation analysis, and search and rescue, among other uses.

Because of the impact of the weather on all aspects of life, orbital satellite observation of the atmosphere was an obvious application at the beginning of satellite research. William Kellogg and Stanley N. Greenfield analyzed the issue at length in RAND Corporation report R-218 in April 1951. Throughout the 1950s, however, the majority of scientist, engineers, and meteorologists rejected the practicality of satellite-borne TV cameras or their output for weather analysis. United States government agencies and contractors ignored or rejected television applications on satellite because of the relative novelty of electronic video technology. Approved by the Federal Communications Commission for electronic monochrome and color transmission standards in 1941 and 1953, television was still a new part of American life in the 1950s. In 1955, Lockheed Aircraft Corporation received a United States Air Force (USAF) contract to build a satellite reconnaissance system using film cameras, winning over a proposal by RCA to use television cameras.

In addition, meteorologists in that period were still establishing their profession's legitimacy, partly through the sophisticated analysis of the changing physics of the atmosphere--its motion, temperature, and pressure. Most of them rejected the utility of cloud cover imagery as too simplistic and incompatible with the data demands of forecasters. This attitude pervaded the Air Force Cambridge Research Center and the U.S. Army Signal Corps as well.

Despite this resistance, the Radio Corporation of America (RCA) proposed TV camera applications to the Army Ballistic Missile Agency (ABMA) in 1956. Some members of the ABMA were interested in satellite-based surveillance TV applications and awarded RCA classified contracts to fund lightweight, slow-scan TV camera development. RCA Laboratories staff had designed, developed and tested the small Vidicon TV camera tube along with the vast majority of associated equipment, from cameras and sensors to transmitters and displays, that made the national television standards practical.

In the fall of 1957 a team from RCA's David Sarnoff Research Center (DSRC) in Princeton conducted a series of classified briefings for the U.S. government. It gave demonstrations to the top levels of the Department of Defense (DoD) and Central Intelligence Agency (CIA), government technical consultants, and ultimately before the House congressional committees of jurisdiction. These presentations highlighted a lightweight, durable, high-resolution Vidicon TV camera suitable for space applications, and established the feasibility of an orbiting satellite payload and mission involving video reconaissance of the earth's surface.

Coincidentally the Soviet Union launched Sputnik, the world's first orbiting satellite that October. Within six months, the DoD's Advanced Research Projects Agency (ARPA) transferred management of the TV-based satellite program from the ABMA to the U.S. Army Signal Corps Research and Development Laboratories (USASCRDL) in Fort Monmouth, NJ. RCA created the Astro-Electronics Products Division in 1958 for continued work on contracts with Fort Monmouth, including TIROS, which was commissioned by NASA in January 1959.

To create its new space technologies division, RCA transferred teams that worked under previous related classified contracts from the DSRC and the Defense Electronics Products Division in Camden. RCA Astro also hired experienced engineers from government agencies and other talented individuals. The RCA Astro engineering team began designing and testing of the new equipment for orbital and ground systems. All equipment development and production became the responsibility of new division.

The great technical advance that TIROS represented was the integration of a deceptively simple set of electronic, electrical, and mechanical systems with systematic built-in redundancies and feedback systems on a 270-pound satellite. This enabled a reliable and efficient satellite design.

Launched by a Thor-Able rocket booster into a 400-mile-high circular orbit with an inclination of 50 degrees, TIROS was a spin-stabilized satellite shaped like an 18-sided right prism. Engineers laid out the camera and video recorder chains, attitude, transmission, and energy systems on a baseplate capped by a "hat" covered with 9,000 silicon solar cells. A monopole antenna for reception of ground commands extended out from the top of the cover. Two crossed-dipole 235-MHz FM telemetry antennas for image and data transmission projected out from the baseplate. Five pairs of solid-fuel thrusters on the edge of the baseplate maintained the satellite's spin rate between 8 and 12 rpm once a pair of yo-yo weights reduced the launch spin rate from 125 rpm. Two half-inch Vidicon TV cameras, one wide angle and one narrow angle, recorded up to 32 images on their respective tape recorders unless TIROS was in communications range of one of the ground stations. The cameras could be operated sequentially, alternately, or independently from the ground stations.

RCA Astro issued subcontracts to complete the acquisition of essential equipment for the TIROS test models and flight spacecraft, including:

TIROS I’s success fulfilled America’s Space for Peace initiative and promise, restored American confidence in the Space Race, conclusively demonstrated the merits of expansive space images for meteorology, and enabled the accelerated exploration and development of civilian applications of space.

Earlier film systems of space reconnaissance were limited in duration by the amount of film stored on the satellite and by the awkward collection of film jettisoned by parachute to either an airplane or sea- or land-based landing. A camera on an Atlas ICBM had shown the feasibility of tropospheric cloud observation and Explorer VI took the first televised images from orbit, but the resolution was poor and the experiment was peripheral to the satellite mission's focus on physical phenomena and micrometeorites.

Television pictures from the first orbit of the TIROS I satellite at an altitude of 400 miles demonstrated that significant weather systems could be recognized and located. Succeeding orbits yielded pictures that revealed previously unknown weather phenomena and corroborated other phenomena that had previously been merely suspected.

The first major meteorological discovery made from TIROS I images was the high degree of organization of cloud patterns on a global scale. This revelation increased the utility of weather observation from orbiting satellites.

Image analysts at the U.S. Weather Bureau also found that all cyclones are characterized by a very distinct vortex cloud pattern about their centers. Because of these distinctions, large-scale cloud and weather systems could be easily recognized and tracked for many days. TIROS I detected a storm off the coast of Madagascar and tracked this storm through its television cameras for five consecutive days.

A further discovery of importance was that the weather fronts associated with mid-latitude storms are strikingly clear and easily identifiable on weather-satellite photographs. It is also of great significance that the location of the jet stream over the eastern Mediterranean Sea could sometimes be inferred from cloud bands observed on the televised images.

During the 89-day operating life of TIROS I, it transmitted approximately 23,000 TV photographs to its ground stations, of which meteorologists found over 19,000 useful. Its successors transmitted hundreds of thousands more.

Excerpt 1 from Dickens and Ravenstein

Excerpt 2 from Dickens and Ravenstein