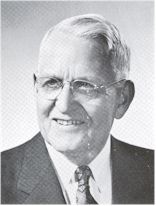 Harvey Fletcher was born on 11 September 1884 and raised in Provo, Utah. Brought up in the community of Latter Day Saints, he remained active in the church throughout his life. He received his early training at the Brigham Young University from which he was graduated in 1907. He taught there for a year and married Lorena Chipman before moving to Chicago to continue his studies.

Having promised to join the faculty of his alma mater, Fletcher returned to the Brigham Young University in 1911 as Chairman of the Physics Department. He was the only faculty member to have a Ph.D. degree in those years. He taught there for five years, continuing his research, building the physics faculty, and inspiring many students who went on to establish national reputations on the faculties of UCLA, University of Utah and Brigham Young.

The Western Electric Company had been courting Fletcher from his Chicago days, and he finally accepted their offer in 1916 and moved to New York. Working in their research and development department, he laid out a research plan to study the fundamentals of human speech-produced sound. While at the company, he developed the 2-A Audiometer, which became an industry standard. Although he contributed broadly to Bell’s work on sound technologies, he was particularly committed to work on devices for the hearing impaired. He guided the development of the Western Electric Hearing Aid, the first such device to use vacuum tubes. Fletcher developed a group survey method using recorded sound of decreasing volume which became widely used in schools. His work helped improve the telephone and other technologies developed by Bell.

By the mid-1920s, when the Bell Telephone Laboratories was formed, Fletcher’s research on acoustics had developed into a separate unit. The company named him director of acoustical research in 1928 and by 1935 he had been promoted to Director of all Physical Research. In the 1930s, he was the first to demonstrate stereophonic transmission and stereophonic recording. In 1939, while working with Leopold Stokowski, he presented a concert featuring a stereophonic recording of the Salt Lake Tabernacle Choir to a capacity crowd in New York City's Carnegie Hall. During the Second World War, he contributed to work on underwater sound detection and identification.

At age 65, Fletcher retired from Bell Labs to take a professorship in electrical engineering at Columbia University, where he helped develop a department on acoustics. He left Columbia after three years, to return to Brigham Young University. Here he developed the engineering course and became Chairman of Engineering Science, which later developed into the university’s College of Physical and Engineering Sciences. He returned primarily to his research beginning in 1960, with a particular interest in musical tones. He became Professor Emeritus at age 82, but continued his work until his death in 1981.

Fletcher published extensively on his speech and hearing findings. Over the course of his career, he published over fifty papers, acquired some two score of patents and published a book entitled Speech and Hearing which became a standard text.

Fletcher was a longtime member of the American Physical Society, becoming increasingly active upon his move to New York, and achieving the Presidency in 1945. In 1935 he became a member of the National Academy of Sciences. In 1937 he was elected vice-president of the American Association for the Advancement of Science. He was a Fellow of the Institute of Electrical and Electronics Engineers, an honorary member of Sigma Pi Sigma and a member of Phi Beta Kappa and Sigma Xi. He was given the Progress Medal Award by the American Academy of Motion Pictures, in Hollywood. For eight years he acted as National Councilor for the Ohio State University Research Foundation. High honors have also been given by the United States Army and Navy, and by the President of the United States.

Fletcher was awarded the IEEE Founders Medal in 1967 "For his creative contributions to the science of physical acoustics, electrical engineering, and for his management skills in the operation of a leading research laboratory."


In Memory of Harvey Fletcher.

Retrieved from "https://ethw.org/w/index.php?title=Harvey_Fletcher&oldid=146033"
Categories:
This page was last edited on 27 January 2016, at 18:55.
About ETHW
Policies and disclaimers