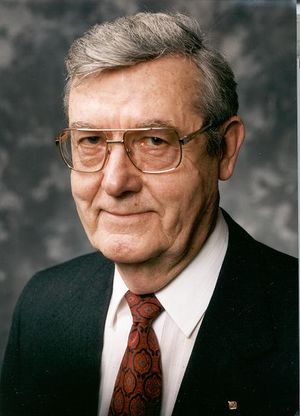 Claud Myron Davis was born on August 23, 1924 in Water Valley, Mississippi. During World War II, he served in the South West Pacific Theater in the Army Airways Communications System (AACS). In 1950, he earned the B.S. degree in Electrical Engineering from Oklahoma State University, graduating as the outstanding engineer in the class of 1950. In 1961, he received the Sc.M. degree in Applied Mathematics from Harvard University.

Mr. Davis was employed by the IBM Corporation from 1950 to 1989: two years in the field organization; in the Systems Development Laboratory at Poughkeepsie, New York, from 1952 to 1976; seven years in device and chip development in the Fishkill, New York Laboratory, and the last six years at Corporate Headquarters in White Plains, New York.

Mr. Davis was a member of the design team for the first IBM large-scale commercial computer, the IBM 701. During his career, he held positions of responsibility in computer systems design and development, both in management and technical areas. He made significant contributions, individually, and as a team member. His contributions include several firsts: the first fully checked computer (experimental); responsible for the first computer system fully compatible with its predecessor; the first fail-safe / fail-soft dynamically configurable computer system (for air traffic control); implemented the first hardware instruction retry; was the design team leader for the first system 360 dataflow on a bipolar chip.

His systems design concepts were used in the IBM response to the FAA RFQ (1963) for the Enroute Systems Central Computing Complex, the IBM 9020 System. As the program engineering manager of the 9020 hardware system, he was responsible for all technical aspects of the design, build and release to manufacturing. This system provided air traffic control over the 48 contiguous states of the United States for more than two decades.

Mr. Davis was a Life Fellow in the IEEE, and has been active in its worldwide activities. He was the author or co-author of several papers on system design, including such topics as the 360 dataflow on a bipolar chip and reliability in system design. He was the recipient of three IBM Outstanding Contribution Awards, and the Elmer A. Sperry Award for advancing the art of transportation.

In 1956, he married Virginia Nenni of Poughkeepsie and they have two grown children, Stephanie Anne and Claud Philip. Mr. Davis retired from IBM in 1989 and did post-retirement consulting. He remained active in professional societies and was a member of the Board of Managers and treasurer of Brookmead, a nursing home at Rhinebeck, New York. He enjoyed pursuing his hobbies and spending time with his family.