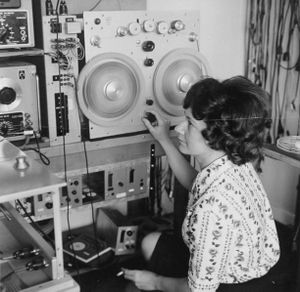 Else Marie Pade was born on December 2nd, 1924 in Aarhus, Denmark. As a child, she was afflicted with pyelonephritis and frequently bedridden, and would create pictures in her mind from listening to sounds from the outside. Pade found an early interest in music and was took lessons at Aarhus' People's Music School, and at age 16, she was playing in a jazz band.

Pade took piano lessons with Karin Brieg, who brought her into the Danish resistance during World War II. In 1943, Pade spit on a group of German soldiers, and fled Aarhus to Klintegården, where she distributed illegal newspapers. By 1944, she was trained in the use of weapons and explosives, and joined an all-female demolition team. The group aimed to destroy the telephone wires in Aarhus, but was arrested by the Gestapo on September 13th, 1944. Inspired by the sounds she her from outside, she began composing music on the walls with a beltbuckle. After being transferred to Frøslevlejren, Pade began to compose more frequently.

After the war ended, Pade attented the Royal Academy of Music, Aarhus, and heard a program featuring Pierre Schaeffer's Musique concrète compositions on Danmarks Radio in 1952. Immediately connecting Schaeffer's composition techniques with her childhood experiences forming pictures in her mind from ambient noises, Pade contacted Schaeffer and began to write her own pieces using tape and oscillators. Her piece 1955 "En dag på Dyrehavsbakken" is considered to be the first piece of musique concrète from Denmark, and her 1958 piece "Syv Cirkler" was the first electronic piece to be performed on Danish radio.

In the 1960s, Pade attended courses at the the Darmstadt International Summer Courses for New Music, including those of Karlheinz Stockhausen, György Ligeti, and Pierre Boulez. While she was an active composer for most of her life, her work was not widely recognized beyond Denmark. In 2014, Important Records released a two-CD retrospective of some of her most important works from 1958 to 1995.

Retrieved from "https://ethw.org/w/index.php?title=Else_Marie_Pade&oldid=155063"
Categories:
This page was last edited on 8 May 2017, at 15:38.
About ETHW
Policies and disclaimers