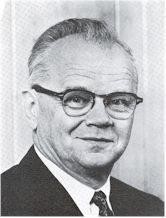 Elmer William Engstrom was born in Minneapolis, Minnesota, on August 25, 1901, and was graduated in 1923 from the University of Minnesota with a Bachelor of Science degree in Electrical Engineering. He became associated in that year with the General Electric Company and was assigned to engineering development work in its Radio Engineering Department at Schenectady, New York. His early responsibilities included work on high power radio transmitters, followed by development activities in the receiver field. When General Electric initiated commercial activity in motion picture sound, Dr. Engstrom was placed in charge of the company's engineering development and apparatus design.

In 1930 Dr. Engstrom joined the Radio Corporation of America as Division Engineer with responsibility for development and design of sound motion picture apparatus for the RCA Manufacturing Company at Camden, New Jersey. Soon afterward, he assumed engineering responsibilities for RCA's broadcast receiver development and production, and he carried on this activity until he was called upon to organize research in the fields of apparatus and systems, and subsequently in electron tubes for radio application.

Beginning in the early 1930's, Dr. Engstrom assumed immediate supervision of RCA's intensified program of television research and development. He brought to this program the concept of television as a complete system. This procedure led to the development of a practical commercial black and white television system by 1939. In the postwar years, as the head of RCA Laboratories, Dr. Engstrom directed a similar systems program which led to the achievement of the compatible all-electronic color television system.

In 1943 Dr. Engstrom became Director of Research of RCA Laboratories and in 1945 he was elected Vice President in Charge of Research. After several executive assignments he was appointed Senior Executive Vice President of RCA in 1955. Six years later he became President of RCA and on January 1, 1966 he assumed the position of Chief Executive Officer of the Radio Corporation of America and Chairman of the Executive Committee of the RCA Board. Energized by the rapid progress in his industry, he played a critical role in RCA’s production of the first color television tube.

During World War II, Dr. Engstrom was responsible for research in the fields of radar, radio, airborne television electronics, and acoustics, and in 1946 he visited Norway, Sweden, and Denmark as a member of the Scandinavian Research and Industries Tour.

Dr. Engstrom was the author and co-author of numerous articles that appeared in technical publications including: Journal of the Society of Motion Picture Engineers, Proceedings of the Institute of Radio Engineers, Electrical Engineering, Journal of Applied Physics, Electronics, Journal of the Franklin Institute, The New Jersey Professional Engineer, and RCA Review. He was a Fellow of the Institute of Electrical and Electronics Engineers.

Dr. Engstrom's many technical and business accomplishments were recognized with honorary doctorates from no less than 18 colleges and universities. Awards were also conferred by the President of Italy and the King of Sweden.


Dr. Engstrom was awarded the IEEE Founders Medal in 1966 "For his leadership in management and integration of research and development programs and for his foresighted application of the systems engineering concept in bringing television to the public."

In local community activities, Dr. Engstrom was a Director and past Chairman of the Princeton Chapter of the American Red Cross; for several years he was a Trustee of Princeton Hospital. He also served as a member of the Department of Radio and Television, Presbyterian Church, U.S.A. In honor of his community activities at his home in Princeton, New Jersey, Dr. Engstrom was named Man of the Year for 1964 by the Princeton Chamber of Commerce and Civic Council. In 1962 he was given the Gerard B. Lambert Community Service Award from the Princeton Area United Community Drive.

Dr. Engstrom married the former Miss Phoebe Leander in 1926. They had one son, William Leander, born in 1934. Dr. Engstrom passed away on 30 October 1984 in Hightstown, New Jersey.

Retrieved from "https://ethw.org/w/index.php?title=Elmer_W._Engstrom&oldid=145667"
Categories:
This page was last edited on 22 January 2016, at 17:52.
About ETHW
Policies and disclaimers