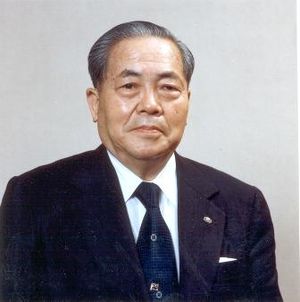 Dr. Kobayashi is a Life Fellow of the IEEE, as well as past Chairman of the IEEE Tokyo Section. He is an officer and member of several organizations, industrial, professional and governmental. Some of these include Counsellor of the Science and Technology Agency, Prime Minister's Office; Member of the Aeronautics, Electronics and Other Advanced Technologies Council of the Science and Technology Agency, Prime Minister's Office; Advisor of the Space Exploration Committee, Science and Technology Agency; Prime Minister's Office; Executive Director of the Federation of Economic Organizations; Chairman of the Space Development Promotion Council, Federation of Economic Organizations; President of the Optoelectronic Industry and Technology Development Association; President of the Industrial Research Institute, Japan; Foreign Associate of the National Academy of Engineering; Chairman of the Center for International Cooperation in Computerization; Member of the Board of Trustees of the International Institute of Communications; and Honorary Trustee of the Polytechnic Institute of New York.

Dr. Kobayashi is the author of many technical and industrial papers published in various professional journals. His latest books are "Challenges to the Computer Age," "The Problem of Management in the 1970's," "Quality-Oriented Management," "C & C (computers and communications) is Japan's Wisdom," and "C & C (computers and communications): The Software Challenge -A Human Perspective."

Dr. Kobayashi and his wife, the former Kazuko Noda, have three children-Teiko, Kimiko, and Noriko. (Editor's Note: Dr. Kobayashi passed away on 20 November 1996 in Tokyo, Japan.)

Dr. Kobayashi was awarded the 1984 IEEE Founders Medal "For leadership in the development of computer and communications technologies, their integration into modern networks, and the worldwide expansion of electronics."

Retrieved from "https://ethw.org/w/index.php?title=Koji_Kobayashi&oldid=146423"
Categories:
This page was last edited on 2 February 2016, at 16:35.
About ETHW
Policies and disclaimers