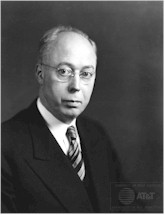 Lloyd Espenschied was born in St. Louis, Missouri, on 27 April 1889, but in 1901 he went to Brooklyn, New York, where he lived with relatives of his mother. He became an amateur radio operator in 1904 and later worked as a shipboard wireless operator for the United Wireless Telegraph Company during summer vacations. He graduated from the Pratt Institute in 1909 with a degree in applied electricity and then worked as an engineer for about a year with the American affiliate of the German Telefunken Wireless Telegraph Company. Among his assignments was the installation of the Telefunken quenched spark system on ships of the U.S. Navy.

He joined the Engineering Department of AT&T in 1910 and remained with the Bell Company until his retirement, in 1954. He joined the Wireless Institute, which merged with the Society of Wireless Telegraph Engineers in 1912 to form the IRE. He was recorded as a discussant of the first paper published in the Proceedings as well as three other papers in the first volume. He became a Fellow of the IRE in 1924 and a Fellow of the American Institute of Electrical Engineers (AIEE) in 1930.

At the Bell Company, Espenschied worked on the design of loading coils used to enhance telephonic communication by wire, and he also was a participant in long-distance radio telephone experiments using a vacuum-tube transmitter conducted by Bell engineers during 1915. He was sent to Pearl Harbor, Hawaii, to test reception from a transmitter in Arlington, Virginia. Beginning in 1916 he worked with several colleagues, including Herman A. Affel, on a carrier multiplex system which was put in operation between Baltimore, Maryland, and Pittsburgh, Pennsylvania, in 1918. As an outgrowth of this work, Espenschied applied for a patent in 1927 on the use of piezoelectric quartz crystals in band-pass filters. He and Affel jointly received a patent on a wideband coaxial cable system of transmission which was disclosed in a prize-winning paper published in AIEE's Electrical Engineering in October 1934. This invention eventually helped make television transmission achievable.

Espenschied also contributed to the development of wire distribution of radio programming used in network radio. He patented a collision avoidance system using reflected waves for railroad trains in 1924 and later applied similar techniques for a radio altimeter for airplanes which was produced commercially by the Western Electric Company beginning in 1937.

Late in his career, Espenschied became a collector of rare books dealing with electricity going back to the 16th century, a collection now located at the Niels Bohr Library of the American Institute of Physics. He also gave numerous talks dealing with invention and the history of telecommunication. He received about 130 patents during his career. He received the IRE Medal of Honor in 1940, "For his accomplishments as an engineer, as an inventor, as a pioneer in the development of radio telephony, and for his effective contributions to the progress of international radio coordination." and the Pioneer Award of the IEEE Aerospace and Electronic Systems Group in 1967. He died on 21 June 1986 at age 97.

Joan Scott, "Lloyd Espenschied, One of the Inventors Of the Coaxial Cable," New York Times, 4 July 1986.

Retrieved from "https://ethw.org/w/index.php?title=Lloyd_Espenschied&oldid=193799"
Categories:
This page was last edited on 3 August 2022, at 20:20.
About ETHW
Policies and disclaimers