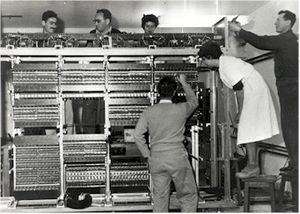 The Weizmann Institute of Science in Rehovot, Israel, built the Weizmann Automatic Computer (WEIZAC) during 1954-1955 with the scientific vision of Chaim Pekeris and the engineering leadership of Gerald Estrin. The WEIZAC was based on drawings from the IAS computer at Princeton University and built with much ingenuity. The machine was the first digital electronic computer constructed in the Middle East and it became an indispensable scientific computing resource for many scientists and engineers worldwide.

The plaque can be viewed in the lobby of the Weizmann Institute of Science, in Rehovot, Israel.

WEIZAC was one of the world's first electronic computers, and the first in Israel. It was designed and constructed at the Weizmann Institute in 1954, and operated until the early 1960s. WEIZAC was used for mathematical research, such as solving problems related to the computation of ocean tides; this entailed complex calculations which could not reasonably be performed manually. The calculations carried out using WEIZAC took hundreds of computer hours, and enabled scientists to chart maps giving a very close approximation of high and low tide fluctuations throughout the world. As a result, the Weizmann researchers predicted the precise location of an amphidromic point (at which high and low tides never occur) in the southern Atlantic. Measurements performed in the wake of the discovery confirmed the existence and location of this point.

In the Beginning[edit | edit source]

Chaim Pekeris, educated as a meteorologist, visited the Institute for Advanced Study (IAS) in Princeton where he was working with Prof. John von Neumann on computational methods for solving physical problems. After the establishment of the state of Israel in 1948, Chaim Weizmann, founder of the Weizmann Institute of Science (WIS) in Israel, asked Pekeris to come to WIS to establish their Department of Applied Mathematics. Pekeris agreed, and later negotiated with the Institute to support building the first digital computer in Israel. After some failed attempts to attract knowledgeable engineering leadership, Pekeris and Prof. Ephraim Frei managed to interest Gerald Estrin.

Gerald Estrin, upon the completion of his PhD at the University of Wisconsin, was invited to work at IAS. The year was 1950 and IAS was working on the electronic computer project. Gerald and his wife Thelma (also working on her PhD in electrical engineering) arrived at IAS in June 1950. In late 1952 Gerald was asked to assist in the development of the computer in Israel. Shortly after his arrival in Israel, Gerald was asked to take charge and lead the computer project

In October 1953 the Estrins set out for Israel, with numerous stops along the way. They arrived in Haifa on 26 December 1953, with the support of IAS, including a complete set of drawings to assist in the building of the computer. Some design changes which led to the remarkable record of reliability achieved by WEIZAC were: acquisition of one of the earliest commercial ferrite core memories, replacement of the original IAS vacuum tubes by more reliable elements and use of very conservative redesign methods. The Weizmann automatic computer (WEIZAC) was enthusiastically begun by the team of Estrin, wife Thelma as electrical engineer and technician Micha Kedem. During the project approximately a dozen individuals worked on the computer.

A big challenge was the securing of materials (parts) in order to build the computer. Unfortunately Tel Aviv had none of the materials required. WIS worked with a company called Landseas Import-Export with offices in New York and Tel Aviv to handle purchasing equipment. As a result of the dedicated work of this company, equipment began arriving to Israel’s two major ports, Haifa and Tel Aviv in June 1954.

Estrin’s next major hurdle was the hiring and training of staff for the project. He identified a number of individuals with the right background, including Zvi Riesel, Aviezri Frankel and Yesheyahu Ziegel, to name a few.

With a team in place and parts arriving from the United States, Estrin was able to proceed. In just 9 short months the central processing unit was very close to completion and an order had been placed for the memory core. The machines, power supplies, and air conditioning were in place, after 15 months in Israel the Estrins returned to IAS in Princeton and after one year Gerald joined the faculty at the University of California, Los Angeles. Over the ensuing months the dedicated team that Jerry pulled together completed the project and in October 1955 the WEIZAC was put into operation. Over the ensuing years software systems, applications software and input-output systems were enriched. It operated until 1963. Today it resides in the WIS Ziskind Building, which also houses Computer Science and Applied Mathematics Department, Mathematics Department and the Frankel Mathematics Library.

Special thanks to Jerry Estrin for his personal input to this milestone description.