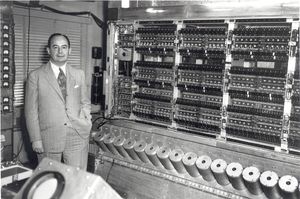 John von Neumann was a polymath mathematician, physicist, computer scientist, and economist in the twentieth century.

Neumann was born in 1903 in Budapest, then in the Austro-Hungarian Empire. His parents were Jewish and his father, a banker and law doctorate, was elevated to the nobility in 1913 for his services to the emperor. Janos (later John) Neumann was a child prodigy and in addition to attending school, he received private tuition in advanced calculus. By the age of nineteen he had already published two major mathematical papers. He studied chemistry at the University of Budapest at the request of his father, but soon turned to mathematics, his first love. He earned a doctoral degree in math at the age of twenty-two, under Pazmany Peter at the University of Budapest. He also earned a diploma in chemical engineering from the ETH Zurich, in Switzerland.

From 1926 to 1930, Neumann taught at the University of Berlin and published more than thirty major academic papers. In 1930, he was invited to Princeton University and then offered a faculty position at the Institute of Advanced Study, when it was founded in 1933. Before moving to the U.S., Neumann married his childhood friend Mariette Kovesi. They had a daughter but separated in 1936. In 1937, Neumann became an American citizen. In 1938, he married Klara Dán, also from Budapest, who became a pioneering computer programmer and instructor.

Neumann spent his life doing research at the Institute for Advanced Study (IAS). He contributed immensely to the axiomatic system of the theory of sets. His research on rings of operators practically founded the field of continuous geometry. He also made foundational contributions to analytic measure theory, mathematical formulation of quantum mechanics, almost periodic functions, lattice theory, game theory, quantum logic, mathematical economics, mathematical statistics and fluid dynamics. He published articles on operator theory and his work was applied in the von Neumann mean ergodic theorem. He introduced the study of rings of operators through the von Neumann algebras and also introduced the direct integral in 1949. Neumann built on his model of an expanding economy and matrix games and invented the theory of duality in linear programming.

He was also an expert on explosions and the mathematics of shaped charges. He worked for the Navy and did research on nuclear weapons in the Manhattan Project. After World War II, he worked closely with the Los Alamos National Research Laboratory, where his wife Klara Dán wrote the code used on the MANIAC machine that he and Julian Bigelow developed. Von Neumann was also one of the pioneers in the field of computer science. He collaborated with the University of Pennsylvania's Moore School of Electrical Engineering, which was building the ENIAC whose design underlay that of the IAS machine. He introduced stochastic computing and also created the field of cellular automata. His design for the self-replicating computer program is regarded as the world’s first computer virus and von Neumann is considered the theoretical father of computer virology.

Apart from doing research at the Institute for Advanced Study, Neumann was a consultant for the U.S. Army and business corporations like the RAND Corporation, Standard Oil, General Electric, and IBM, among others. He was the president of the von Neumann Committee for Missiles and later a member of the United States Atomic Energy Commission. A self-proclaimed anti-communist, he favored militarization and nuclear proliferation. Even after being diagnosed with cancer in 1955, Neumann continued his research and professional service until his death in 1957.

The annual IEEE John von Neumann medal is awarded in Neumann’s memory for outstanding achievements in computer science and technology.

Retrieved from "https://ethw.org/w/index.php?title=John_von_Neumann&oldid=182005"
Categories:
This page was last edited on 28 October 2020, at 02:07.
About ETHW
Policies and disclaimers