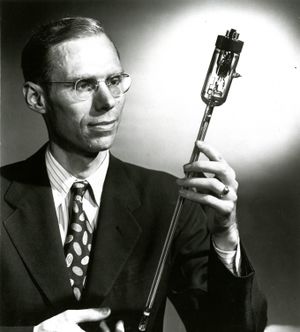 John Robinson Pierce (IRE Student, 1935; Associate, 1938; Senior Member 1945; and Fellow, 1948) made many important contributions to microwave and communications technology during his long career at Bell Laboratories. He also made important contributions to the development of microwave electron tubes such as the “traveling-wave tube.” Pierce is also remembered for naming an amplifying device developed by some of his Bell Labs colleagues—the transistor. Finally, in the late 1950s, Pierce was an early and enthusiastic promoter of communications satellites and played a pivotal role in the development of two of the earliest, Echo I and Telstar.

Pierce was born on 27 March 1910 in Des Moines, Iowa, the son of a traveling salesman. Around 1930, his family moved to Long Beach, California, and then to Pasadena where Pierce was admitted to the California Institute of Technology. At Caltech, Pierce obtained both a B.S degree and a Ph.D. in 1933 and 1936 respectively. In 1936, shortly after earning his doctorate, Pierce joined Bell Telephone Laboratories in New York City, where he worked on various problems concerned with electron-tube design. During World War II, this experience proved valuable when Bell Labs made the transition to microwave research in support of the U.S radar development effort. Pierce helped develop an improved type of “reflex klystron” tube, which was used in radar receivers.

From 1936 to 1955 he worked on high-frequency electron tubes, and particularly on traveling-wave tubes at Bell Laboratories. He became Director of Electronics Research 1n 1952 and in 1962 he was Executive Director, Research in the Communications Principles Division, a field including research in radio, television, electronics, acoustics and vision, mathematics, and group behavior. The Bell Laboratories work on Project Echo was carried out in his department.

In 1948 he received the IRE Fellow Award for his "many contributions" to the theory and design of vacuum tubes.

In 1951 Austrian Rudolf Kompfner joined Bell Labs and began work on a new type of microwave amplifier called a traveling-wave tube. At the time, there were almost no practical electronic devices that could amplify microwaves in a broad range of frequencies. Pierce and Kompfner, working with other Bell Labs colleagues, developed a tube that amplified microwaves by making the waves slow down enough to be in step with an electron beam, which transferred its energy to the waves. The traveling-wave tube proved to be valuable for the construction of microwave communications relay stations both on the ground and later in orbiting communications satellites.

As early as 1954, Pierce advocated using satellites for communications between widely separated points on the ground. Following the Soviet Union’s launch of the first artificial satellite, Sputnik I, in 1957, the U.S government increased its own efforts to launch satellites. Pierce supported the idea of launching a 100-foot (30-meter) aluminum-covered balloon to serve as a passive reflector of microwaves from one ground station to the other. Named Echo I, this satellite was launched in 1960 in cooperation with NASA and the Jet Propulsion Laboratory. In addition to relaying the words of President Eisenhower from the west coast to the east coast of the U.S, Echo I’s highly visible presence in the night sky advertised the fact to millions around the globe that the U.S could orbit satellites too.

With Pierce’s involvement, Bell Labs also developed an active communications satellite called Telstar I, which carried a miniature microwave relay station on board. Telstar enabled the first intercontinental television broadcasts to take place in 1962. Though Telstar was a technical success, changes in U.S government policy ended the Bell System’s further direct involvement in international satellite communications. Pierce's work was recognized by the AIEE in 1963 when he was awarded the Edison Medal 'For his pioneer work and leadership in satellite communications and for his stimulus and contributions to electron optics, travelling wave tube theory and the control of noise in electron streams.' This work also earned him a placement on the President's Science Advisory Committee during the Johnson administration. In 1975, Pierce was awarded the IEEE Medal of Honor for his "pioneering concrete proposals and the realization of satellite communication experiments, and for contributions in theory and design of traveling wave tubes and in electron beam optics essential to this success."

After resigning from Bell Labs in 1971, Pierce spent time teaching and doing research in communications and the acoustics of music at Caltech and Stanford University. During his career, he wrote several books on communications technology for popular audiences including, "The Theory and Design of Electron Beams," "Traveling-Wave Tubes, "Electrons, Waves and Messages," "Man's World of Sound" (with E.E. David, Jr.), and "Symbols, Signals and Noise." He also wrote an autobiography and several science-fiction stories for several magazines. The latter were published under the pseudonym J. J. Coupling.

In 1948 he received the IRE Fellow Award for his "many contributions" to the theory and design of vacuum tubes. He was the recipient of the Eta Kappa Nu Outstanding Young Engineer Award for 1942 and the IRE Morris Liebmann Memorial Prize for 1947. He was Editor of the Proceedings of the IRE 1954-1955. In 1960, he received the Stuart Ballantine Medal.

In 1962, Pierce was a Fellow of the IRE, the American Physical Society, the Acoustical Society of America, and the British Interplanetary Society, and a member of the National Academy of Sciences.

Retrieved from "https://ethw.org/w/index.php?title=John_Pierce&oldid=160158"
Categories:
This page was last edited on 16 July 2018, at 15:22.
About ETHW
Policies and disclaimers