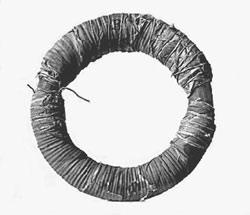 In 1831 Michael Faraday tried to determine what, if any, relationship existed between electricity and magnetism. Faraday wound several different wires near each other on a wooden spool. To one set of wires he attached a galvanometer, an instrument that measures electric current. To the other set of wires he attached a battery. Faraday expected the current flowing in the first set of wires to cause some sort of effect in the second set of wires and it did. However, the effect lasted very briefly and occurred only at the exact time the power from the battery was switched on or off. The experiment seemed inconclusive, so he built a second device, this time winding two wires near one another on an iron ring. This time, just when the power was switched on and off, the galvanometer clearly detected a strong current. This seemed to prove that electricity could be generated from magnetism. This was a breakthrough in our understanding of the nature of electricity and magnetism, but it would soon become very important in the field of engineering, too.

It was later discovered that the number of times the wires were wound was important, because a low voltage passing through a small number of turns would induce a high voltage in a coil with many turns. The induction ring was therefore the basis for the transformer, which is used today in electric power systems to step up and step down voltages to different levels. Faraday’s principle of induction also paved the way for the electric motor, a simple version of which he demonstrated later.

Retrieved from "https://ethw.org/w/index.php?title=Induction_Ring&oldid=157291"
Categories:
This page was last edited on 23 November 2017, at 06:41.
About ETHW
Policies and disclaimers