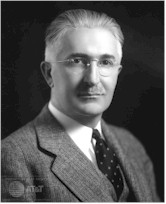 Ralph V. L. Hartley inventor of the electronic oscillator circuit that bears his name, was born in Spruce, Nevada, on 30 November 1888. He graduated with the A.B. degree from the University of Utah in 1909. As a Rhodes Scholar, he received the B.A. degree in 1912 and the B.Sc. degree in 1913 from Oxford University.

Upon returning from England, Hartley joined the Research Laboratory of the Western Electric Company and was given charge of radio-receiver development for the Bell System's transatlantic radiotelephone tests of 1915. He invented his oscillating circuit during that time and also invented a neutralizing circuit to eliminate triode singing resulting from internal coupling.

During World War I, Hartley worked out the principles that led to the development of sound-type directional finders. After the war, he worked at Western Electric and later at the Bell Laboratories, doing research on repeaters, and voice and carrier transmission. During this period he formulated the law "that the total amount of information that can be transmitted is proportional to frequency range transmitted and the time of the transmission."

Illness kept Hartley away from research for about ten years, but in 1939 he returned to Bell Labs as a consultant, and during World War II he was particularly involved with servo problems. He retired from Bell Labs in 1950.

Hartley was awarded the IRE Medal of Honor in 1946 "For his early work on oscillating circuits employing triode tubes and likewise for his early recognition and clear exposition of the fundamental relationship between the total amount of information which may be transmitted over a transmission system of limited band-width and the time required." He was a Fellow of the American Association for the Advancement of Science. He died on 1 May 1970 at the age of 81.

Retrieved from "https://ethw.org/w/index.php?title=Ralph_Hartley&oldid=146898"
Categories:
This page was last edited on 24 February 2016, at 15:03.
About ETHW
Policies and disclaimers