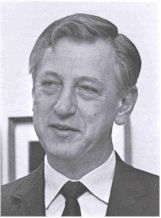 Edward L. Ginzton was born in Russia in 27 December 1915. He emigrated to California from China in 1929, a refugee from the Russian Revolution. He was 13 years old, could speak not a word of English, and had only one year of formal schooling.

During the next eight years, he completed a curriculum that began with the first grade and culminated with degrees in Electrical Engineering from the University of California at Berkeley (B.S. in 1936, M.S. in 1937). He continued his studies with graduate work at Stanford University in Palo Alto, receiving the Electrical Engineer degree in 1938 and a Ph.D. in Physics in 1940. It was during this latter period that he met the Varian brothers, inventors of the klystron amplifier tube. The Varian brothers and Professor William W. Hansen asked him to work in the Physics Department to help explore the characteristics of the new tube and determine the range of its usefulness, as well as to develop methods of making microwave measurements.

In 1946 Ginzton returned to Stanford University where he became Professor of applied physics and electrical engineering. He developed klystron tube technology to the point of obtaining millions of watts of pulsed power, and this led to what is probably the outstanding accomplishment in his career. The first tube operated successfully in 1949, developing 25 million watts of pulsed power at a wave length of ten centimeters. For his work in this field, Ginzton was awarded the Morris Liebmann Memorial Prize in 1957. From 1949 to 1959 he was director of the University's Microwave Laboratory.

In parallel with the klystron work Professor Hansen developed the theory of the electron linear accelerator and proposed construction of a billion volt version, 220 feet in length, powered by 22 of the high power klystrons just mentioned. Hansen died before this project was started and it became Ginzton's responsibility to complete the work, which was done in 1952. Perhaps the greatest demonstration of usefulness of this accelerator was its use by Professor Robert Hofstadter in measuring the size and charge distribution of a number of nuclei - the work for which Hofstadter was awarded the 1961 Nobel Prize in Physics.

In addition to teaching and other academic responsibilities, Ginzton supervised the construction of ten other microwave linear accelerators. In 1956, he became director of a new project, a group of Stanford physicists and engineers who began to study the practicality, usefulness and costs of an accelerator two miles in length. Under his supervision, the preliminary design of the accelerator was completed and the project received Congressional approval in 1961. The two mile device at the Stanford Linear Accelerator Center (SLAC) was completed in 1966 and is being used for research as the highest energy electron accelerator in the world.

In 1969, he was awarded the IEEE Medal of Honor "For his outstanding contributions in advancing the technology of high power klystons and their application, especially to linear particle accelerators."

Ginzton also used his technical and manual skills to pursue hobbies, enjoying photography and restoring of Model A Ford automobiles. He was active in Model A clubs and took great joy in a car of the vintage of his arrival in California, a 1929 Phaeton sedan. As a photographer, Ginzton was a classicist, preferring black and white to color, and large-negative view cameras to 35 mm. His interest in photography dated to his childhood, when he prepared his own chemicals and even coated his own photographic printing paper. His interest gained impetus during years he spent in New York when his wife presented him with a course of photographic study with the great Ansel Adams.

Ginzton and his wife, Artemas, had four children, two daughters and two sons. He passed away on 13 August 1998 in Stanford, California at the age of 82.

Retrieved from "https://ethw.org/w/index.php?title=Edward_L._Ginzton&oldid=156035"
Categories:
This page was last edited on 11 August 2017, at 14:20.
About ETHW
Policies and disclaimers