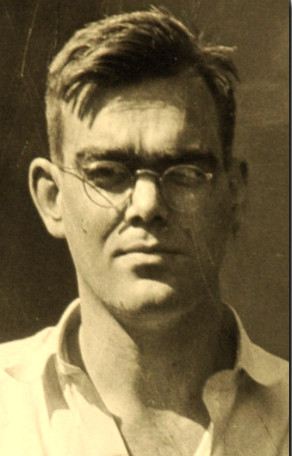 William W. Hansen was an American physicist who contributed greatly to the development of radar and particle accelerators. He is regarded as the founder of microwave electronics.

Hansen was born on May 27, 1909 in Fresno, California, and died at Stanford, California on May 23, 1949. He entered Stanford University in 1924 at sixteen years of age, and received his A.B degree in 1929. In 1928, he and Russell H. Varian became roommates and lifelong colleagues. Hansen received his Ph.D. in 1933, and spent a year and a half as a postdoctoral National Research fellow at MIT, where he was mentored in electromagnetic theory by Prof. Philip Morse.

Hansen returned to Stanford as a physics professor in 1934. Pursuing his interest in resonant electron acceleration for X-ray generation, Hansen invented the microwave cavity resonator in 1935. In 1937 Russell and Sigurd Varian, with Hansen, invented the klystron, applying the cavity resonator to the first practical source of microwave energy. In exchange for sharing patent rights, Stanford received key development funding from the Sperry Gyroscope Company.

Hansen's graduate-student protégés John Woodyard and Edward Ginzton applied the klystron to the first microwave blind landing systems and Doppler radars at Stanford and, with Frank Lewis at the Tuxedo Park, New York laboratory of Alfred Loomis[1], later the founder in 1940 of the MIT Radiation Laboratory in Cambridge, Massachusetts. Hansen and Woodyard also published a seminal paper on array antennas, which Hansen patented with his colleague Frederick Terman.

During World War II, Hansen was assigned to radar work, commuting each week by ship between the Rad Lab in Cambridge and Sperry[2] on Long Island, New York. The physicists recruited to the Rad Lab were trained through his lectures,[3] which were disseminated within the lab as his classified 1200-page "Notes on Microwaves." This became known as "the bible of the Rad Lab," and formed the basis of subsequent microwave publications.[4]

His Stanford team spent the duration of the war at Sperry, where Hansen himself produced 70 patents, including his invention of pulse Doppler radar, the modern form of radar. During this time, he and Woodyard also spent the summer of 1943 as consultants to the Manhattan Project. While in Cambridge, Hansen proposed the establishment of a postwar Microwave Laboratory at Stanford, encouraged by Terman, then the director of the classified Harvard Radio Research Laboratory[5] for radar countermeasures.

Hansen returned to Stanford in late 1945, where he and his colleague Felix Bloch discovered and patented nuclear magnetic resonance, for which Bloch shared the 1952 Nobel Prize in physics. Hansen established and directed his Microwave Laboratory, where in 1947 he produced the 6 million-electron-volt Mark I, the first of a series of iris-loaded waveguide linear electron accelerators that led eventually to the two-mile Stanford Linear Accelerator and its subsequent enhancements and successors. In 1948, Hansen was a founder and key investor of the company Varian Associates. In 1949, Ginzton and Marvin Chodorow developed the Microwave Laboratory's megawatt klystron that is the basis of modern particle accelerators.

Hansen began the design of a 750-million-electron-volt linear accelerator powered by high-power klystrons. Unfortunately, he died on May 23, 1949, before that accelerator, the Mark III, was completed. His death was caused by lung disease resulting from the inhalation of beryllium, which he had machined for use in his Ph.D. X-ray research twenty years before.

Hansen received the IEEE Morris N. Liebmann Memorial Award in 1944 and the Presidential Certificate of Merit in 1948. He was elected to the National Academy of Sciences in 1949. The W. W. Hansen Experimental Physics Laboratory at Stanford University is named in his honor. Hansen and Terman were key contributors to the postwar emergence of Stanford as the research institution that became central to Silicon Valley.

Retrieved from "https://ethw.org/w/index.php?title=William_W._Hansen&oldid=152603"
Categories:
This page was last edited on 14 December 2016, at 20:49.
About ETHW
Policies and disclaimers