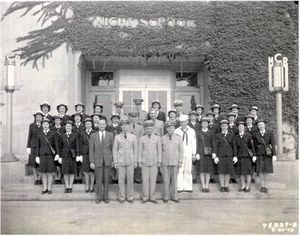 In 1942, the United States Navy joined with the National Cash Register Company to design and manufacture a series of code-breaking machines. This project was located at the U.S. Naval Computing Machine Laboratory in Building 26, near this site. The machines built here, including the American "Bombes", incorporated advanced electronics and significantly influenced the course of World War II.

The plaque may be viewed at Carillon Historic Park, in front of the WAVES cabin (see paragraph below about the WAVES marching each day to and from the camp to building 26, which was about a mile north). 39.728347, -84.200924

The primary work of the United States Naval Computing Machine Laboratory was to develop a machine that could successfully decipher the German Enigma code during World War II.

In the mid-1930s, the Nazi government chose the Enigma as an offline, automatic device for the encryption of communications between elements of the armed forces. The history of the attempts to break the Enigma ciphers, starting from early work at Bletchley Park (BP) in the United Kingdom, had been documented in the pages of the Annals and in the open literature. BP was working on their version of the Bombe, which was labeled "Ultra".

The U.S. Navy first began serious consideration of the use of the Electrical Research Laboratory in Cryptanalytic work in mid-1942. The US Naval Computing Machine Laboratory (NCML) was established in November 1942.

The United States Navy joined with the National Cash Register Company to design and manufacture a series of code-breaking machines.

The National Cash Register Company built Building 26 in 1938. The original purpose of the building was as a classroom facility (night school). In November 1942 the Navy's Electrical Research Laboratory was moved into this facility.

The US focused its efforts on the Op-20-G. The US Naval Computing Machine Laboratory chose Joseph R. Desch as Research Director. Cmdr. Ralph I. Meader was put in charge of the personnel. Desch's first assignment was to design a completely electronic machine. He began plans, but realized the size and number of tubes needed made it unfeasible, he resorted to an electromechanical machine. The design was by Desch (Click here to view an early proposal).

During the three-year period 1942-1945, under the direction of Desch, Research Director of the NCML, the Navy/NCR version of the Bombe was designed to decipher communications encrypted by the German Navy's Enigma.

Desch's preliminary design had been approved in September 1942, and he had plans to build the prototype before the end of the year. At the beginning of 1943, the prototype was still not completed, and the Navy was beginning to wonder whether it had misplaced its trust in Desch's group.

Improved plans for the prototype were approved in late January 1943, giving the Navy sufficient confidence to go ahead with the plans to provide accommodations for the work force of Navy enlisted men and WAVES (Women Appointed got Volunteer Emergency Service) to build the necessary Bombes. Two pilot models were to be constructed, Adam and Eve. At the same time, facilities in Washington, DC, for the installation of the Bombes were needed at the Nebraska Avenue site. This facility, officially known as the Naval Communications Annex, had been the Mount Vernon Seminary and a girls school before the Navy took it over.

It took the efforts of 600 WAVES, 100 Navy officers and enlisted men, and a large civilian workforce to build the first US Bombes in NCR's Building 26 in Dayton, and about 3,000 workers to operate the machines at the US Navy facility in Washington, DC. A total of 120 Bombes had been built and sent to the Naval Communications Annex.

In Dayton, the Sugar Camp resort, which had been NCR's sales force's training facility, had been turned into the dormitory facility for the WAVES. They were marched to NCR's Building 26 in three shifts to be the manufacturing force for the Bombes. At the reunion in Dayton in September 1995, several women described their daily activities, which consisted primarily of soldering and wiring, not knowing at the time what was the purpose. One of the wiring tasks was to recreate the Bombe wheels that emulated the Enigma rotors. Each Bombe required 64 wheels. To maintain secrecy, one WAVE was given the wiring diagram for one side of a wheel. Another WAVE soldered the other side. When the WAVES were transferred to Washington, many of them saw the completed machines for the first time and saw how their work fitted into the whole plan.

The hand methods of decryption averaged 600 hours per message at the beginning of 1943; by the end of the year, using the US Bombe, the time was reduced to 18 hours, less than one day!

There are different versions of the origin of the term "Bombe". One account states that two Polish engineers, who were working on a code-breaking machine, were quite fond of an ice cream cone called the Bombe. Another story states that the new machine produced loud ticking noises as it operated; thus it was nicknamed "The Bombe".

Excerpted from an article entitled "The US Bombes, NCR, Joseph Desch, and 600 WAVES: The First Reunion of the US Naval Computing Machine Laboratory," John A.N. Lee, Colin Burke and Deborah Anderson, IEEE Annals of the History of Computing, Volume 22, No. 3 July-Sept 2000. © IEEE